Home/Issues/Musings on sundry items
Previous Next 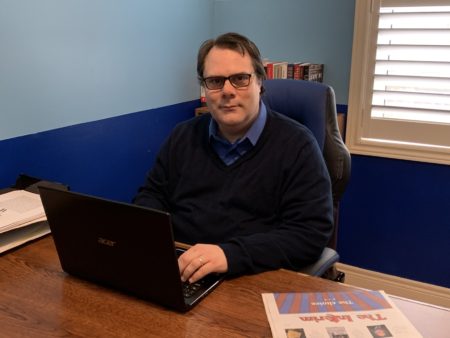 Last month was Joe Campbell’s last as a regular columnist. This month, Jim Hughes, president emeritus of Campaign Life Coalition, writes about Joe’s long-time involvement in the pro-life movement and what his writing has meant to so many. There are many privileges of editing this newspaper, but my greatest pleasure has been to read Joe Campbell’s columns each month when he emailed them in. I did not first read them with my editor’s hat on, but rather that of a fan. Not that his copy required much editing, if it needed any at all. Joe had an extraordinary faculty for language, its playfulness and peculiarities, and he wielded it against the folly of much of modern life. He was so entertaining that some readers may not have realized that he was imparting deep philosophical lessons. I have told Joe that he is welcome to write for the paper any time. I join many of our readers in eager anticipation of his – I hope – return to these pages.

The Associated Press Stylebook tweeted a new advisory on April 13: “Don’t use the term mistress for a woman who is in a long-term sexual relationship with, and is financially supported by, a man who is married to someone else. Instead, use an alternative like companion, friend or lover on first reference and provide additional details later.” The details that followed were not really details, with the AP Stylebook Twitter account noting: “We added this guidance last year; it’s not new. We understand it’s problematic that the alternative terms fall short. But we felt that was better than having one word for a woman and none for the man, and implying that the woman was solely responsible for the affair.” Sure, but in journalism school future reporters and editors are taught to be specific and concise; companion and friend do not really tell the story that mistress does. Journalist Jack Posobiec replied several other possibilities: “Concubine? Consort? Courtesan?” — all of which do pass the J-school test of specificity and conciseness.

Kate Darling, a research specialist in human-robot interaction and robot at the Massachusetts Institute of Technology Media Lab, was interviewed by The Guardian, about the relationship between human beings and robots. She thinks the proper way to look at the new technology is to compare them to animals, not humans, and the wide-ranging conversation was interesting throughout, if sometimes bizarre. She is not worried about companionship robots replacing human relationships: “A relationship with a robot wouldn’t necessarily take away from any of what we already have.” But she does have a concern “that companies may try to take advantage of people who are using this very emotionally persuasive technology.” The example Darling offers is “a sex robot exploiting you in the heat of the moment with a compelling in-app purchase. Similar to how we’ve banned subliminal advertising in some places, we may want to consider the emotional manipulation that will be possible with social robots.” There are technological issues that arise from such scenarios (privacy issues come to mind) and, of course, the moral issues (sexual congress with a physical thing, no matter how humanlike, is wrong), but this sort of commercialization of sex is particularly unseemly. That said, how, considering the degree to which we have already commodified this most intimate of human relationships with the decriminalization of prostitution and widespread acceptance of pornography, can there be objections to the further commercialization of sexual activity. Slippery slopes, my friends.

Supreme Court Justice Clarence Thomas raised issues about the power of digital platforms – Big Tech companies like Facebook, Twitter, Google — in his concurring opinion in “Biden v. Knight First Amendment Institute.” He wrote: “Today’s digital platforms provide avenues for historically unprecedented amounts of speech, including speech by government actors. Also unprecedented, however, is the concentrated control of so much speech in the hands of a few private parties. We will soon have no choice but to address how our legal doctrines apply to highly concentrated, privately owned information infrastructure such as digital platforms.” I am excited to see how government will regulate the internet and how the court are likely to adjudicate these issues in the future. There is a growing consensus on the political left and right that the status quo is not working. It is not enough to say “but Facebook is a private company so it can do what it wants.” Bari Weiss, the former New York Times editor, on her substack – a new platform for blogging – answered the private company canard by quoting the social critic David Sacks: “When speech got digitized, the town square got privatized and the First Amendment got euthanized. If you can’t speak online — or if your ability to speak online is controlled by a tiny handful of companies with no due process — how do you really have a free speech right in this country any more? … Imposing a common carrier obligation on Big Tech would prevent these corporations from doing what they are doing now: discriminating on the basis of creed.” Monopoly power is the issue, not private versus public.

On Saturday, April 17, Hester Ford, the oldest living American, died in Charlotte, North Carolina. She was either 115 or 116 years old — she isn’t quite sure. This is amazing. Her biography is quite incredible. She grew up picking cotton in the south, was a teenager when women won the right to vote in America, and is the mother of a World War II veteran. She has been a widow since 1963 and lived alone for more than 50 years until the age of 108 when she fell in the bathtub, which required a brief stay in the hospital — the first time she was hospitalized in her long life. Family members moved in with her so she wouldn’t have to move into a long-term care home. She enjoyed doing puzzles and listening to gospel music. But these numbers are staggering, and may explain her fondness for thumbing through family photo albums: she had 12 children, 48 grandchildren, 108 great-grandchildren, and 120 great-great grandchildren. Her death notice said, “she was the seed that sprouted leaves and branches which is now our family.” Quite a magnificent family tree, it is.