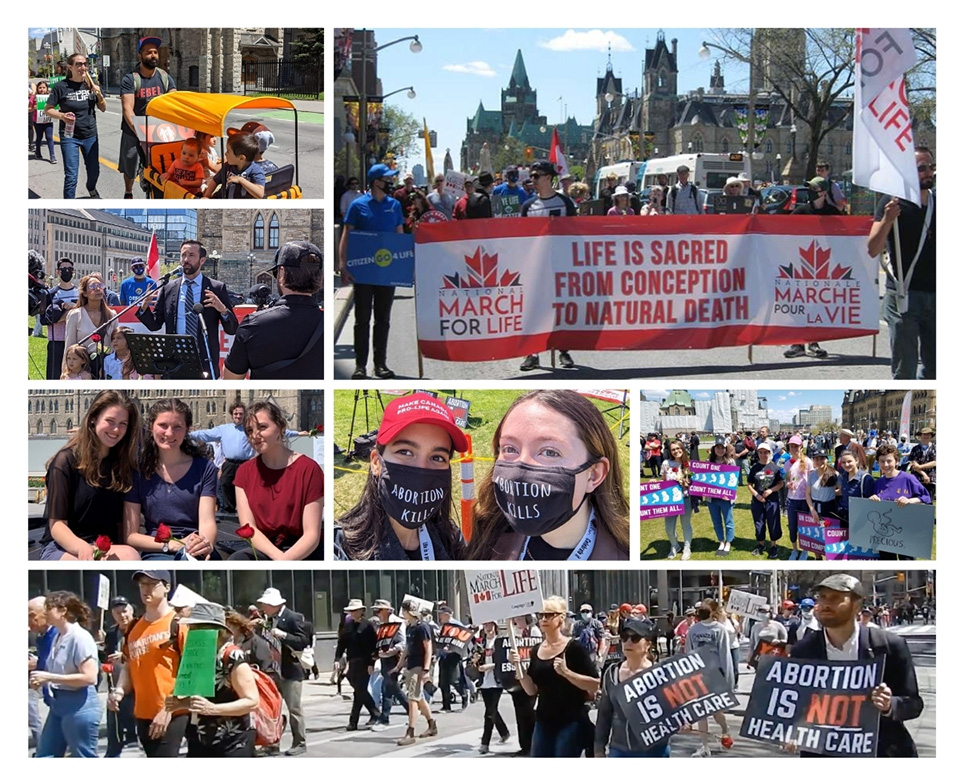 For the second consecutive year, the National March for Life in Ottawa was affected by the pandemic, although this year they were able to hold a smaller event and march as approximately 500 people attended in-person to hear a smaller program of speakers before marching through the streets in the nation’s capital.

Campaign Life Coalition, which was forced to provide an entirely online virtual March for Life in 2020, organized a hybrid event this year, with online programming and a virtual Rose Dinner and youth conference. Those who could not attend the in-person march in Ottawa on May 13 could watch the program live on CLC’s Facebook channel or view highlights the following week on the Alabama-based EWTN channel.

CLC Youth kicked off the 2021 National March for Life rally, welcoming a smaller-than-usual, but no less enthusiastic crowd on the lawn of Parliament Hill.  Jean-François Denis from Theo Vox led the opening prayer, offering them for the innocent victims of abortion.

CLC president Jeff Gunnarson addressed the rally and thanked the March for Life committee for organizing the event and grassroots supporters for showing up despite stay-at-home orders that prevented pro-life, church, and school groups from attending the event. Gunnarson noted that the 2021 National March for Life’s theme was “You are not alone” and that this year’s march was dedicated to long-time CLC leader Karen Murawsky, who died last year.

Angelina Steenstra from Silent No More Awareness talked briefly about what abortion-minded women and women who have had abortions go through, saying, “My hope is to work towards a future where every woman understands that abortion” is not a viable option.

Euthanasia Prevention Coalition executive director Alex Schadenberg spoke about the cruelty of euthanasia and concluded, “Our country talks about freedom and autonomy but that is a lie. Euthanasia takes advantage of hopeless individuals by killing them at the most vulnerable time in their lives.”

Independent MP Derek Sloan, who was kicked out of the Conservative Party caucus earlier this year, said, “Standing firm in your convictions gives you an even stronger pedestal. Never back down or compromise even if you feel like you’re alone.”

Before the march started, CLC Vice President Matt Wojciechowski told EWTN why the National March for Life is important:  “We are in this world, we are not of this world. It’s essential to share the truth about abortion with the world and let God take care of the rest”.

The virtual Rose Dinner was opened by Fr. Mark Goring of the Companions of the Cross. Before offering a prayer, Fr. Goring spoke about COVID vaccines that utilize aborted baby cells in their testing and manufacturing. 40 Days for Life founder David Bereit was the master of ceremonies, and he encouraged people to grab a bite to eat or a “cold or hot beverage” to enjoy during the proceedings.

Gunnarson once again greeted everyone, noting that he was “inspired by your faithfulness and engagement in the pro-life cause.” He said the National March for Life provided the opportunity to let the rest of the country know that people won’t stand for abortion in Canada. Margie Mountain, co-chair of the National March for Life, talked about Karen Murawsky, to whom the March is dedicated. Mountain said “there was nothing she did not do or could not do” to oppose abortion.

Bereit reflected on how the National March for Life began, noting that Nellie Grey, the foundress of the March for Life in Washington, suggested to Jim Hughes at a meeting of pro-life leaders in the U.S., that Canada should have its own march, and after Hughes discussed the idea with the late Fr. Alphonse de Valk, then editor of Catholic Insight, the National March for Life was born. Bereit urged viewers to never forget those who laboured in the pro-life movement previously: “We stand on the shoulders of giants.”

Patrick E. Kelly, Supreme Knight of the Knights of Columbus, said he looked forward to joining Canadian March for Life in person because he served as chairman to the U.S. march for a decade and the movement is “dear to my heart,” adding there is “no greater human rights issue,” today.

Montreal Archbishop Christian Lepine in his greetings to the virtual dinner reminded viewers that with God, “You are not alone when making big decisions in life and death” and “you are not alone in defending life.” He said when people pray, they are never alone.

In the week before the march, CLC hosted a number of online events including a pro-life webinar, “From Conception to Natural Death,” airings of pro-life movies and discussions with their creators, as well as online church services. There was also a virtual Candlelight Vigil featuring music and testimonials.