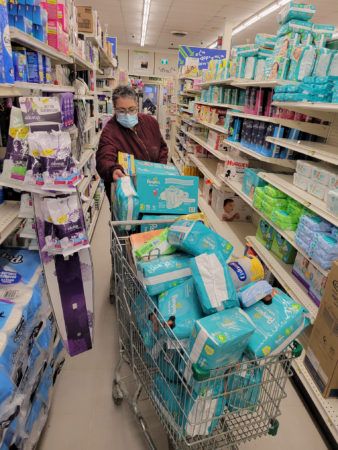 CLC partnered with former Nunavut MLA Patterk Netser and his wife, Mona, “to help mothers in need in one of the most remote and often forgotten regions in Canada.” In 2020, Premier Joe Savikataaq stripped Netser of his ministerial duties he put a message on Facebook that “All lives matter” in response to Black Lives Matter protests in the U.S. CLC national president Jeff Gunnarson said Netser “definitely won’t let a little thing like ‘being cancelled’ stand in the way of doing his pro-life work.”

On Nov. 25, CLC emailed supporters to ask them to support the initiative with the goal of raising $10,000 in ten days to provide material support Nunavut mothers. Netser would use his network to find women in need and distribute supplies, and he worked with Winnipeg-based Calm Air to fly, free of charge, supplies that are not readily available in Iqaluit.

Gunnarson said, “we thought it was an ambitious target to shoot for, but we weren’t expecting what happened after the email went out.” CLC supporters helped the organization exceed its goal in the first four hours of the campaign. In total, CLC raised $60,000 to help Nunavut mothers and their children.

Gunnarson said in a follow-up email to supporters, “our entire organization has been blown away by the incredible generosity our supporters have shown over the past couple of weeks.” He said, “we’ve never had such a phenomenal response to a fundraising initiative like this over such a short period of time, not in 40 years.”

Just before Christmas, the Netsers reached out to more than 30 women, providing them with diapers, baby food, and other necessities.

The goal, said Gunnarson, is to create a “sustainable program” that will serve mothers and their children long-term because “living in Nunavut can be challenging, especially for young pregnant moms and new mothers.”

In 2020, there were 209 abortions procured by Nunavut women (most of them outside the territory) compared to 840 births. Gunnarson said that the federal government and Nunavut bureaucrats promote abortion and “vulnerable women will think that abortion is their only answer.” He said that through the generosity of CLC’s supporters, Nunavut mothers will be assured they are not alone.