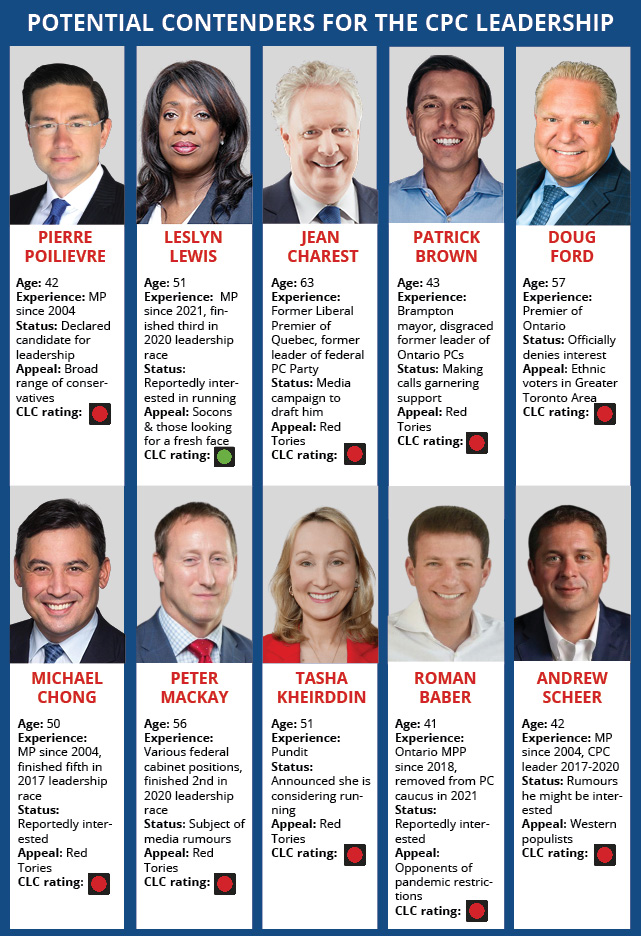 Following the September 2021 federal election in which the Conservatives lost two seats and nearly a half million votes compared to their 2019 showing under Andrew Scheer, there were calls for Erin O’Toole to resign as leader of the party. Campaign Life Coalition called for O’Toole to resign immediately and, failing that, for the caucus to vote him out as leader under the provisions of the Reform Act. National Council member Bert Chen tweeted out a petition calling for a leadership review.

In an Oct. 4 letter sent to his Conservative colleagues, Senator Michael MacDonald (Nova Scotia) criticized O’Toole’s move to the political centre during the campaign: “Part of the issue was that by the end of the campaign nobody knew what Erin stood for, including many card-carrying Conservatives.” MacDonald wrote that O’Toole ran as a Red Tory in the 2017 leadership, a True Blue in the 2020 leadership, and “then as leader he turned the party back to the left.” MacDonald said that Canadians wonder: “what is he – a red Tory centrist, a blue Conservative, or just someone who tacks with the wind and goes where the winds carry him?”

As it became evident that the caucus was not ready to vote out O’Toole and the party membership would be required to wait until the 2023 policy convention to have their say on O’Toole’s leadership, Senator Denise Batters (Saskatchewan) launched a petition that appeared to abide the party’s rules calling for an early review, saying that O’Toole had flip-flopped on issues such as carbon taxes, a ban on firearms, and conscience rights. Party president Robert Batherson stated the petition was not in order and would not be considered by National Council.  O’Toole booted Batters from caucus.

The move proved controversial. The Conservative senators kept Batters in the Conservative Senate Caucus as did Tory MPs and Senators in the Saskatchewan Conservative Caucus. While O’Toole kept a publicly cheery face, going so far as “welcoming” the news that these caucuses were defying the leader, there were whispers that he was being heavy-handed in trying to prevent further public opposition to his leadership. Several MPs and their staffers told The Interim that they felt pressured to publicly support the leader.

MPs who talked to The Interim were upset with how O’Toole managed the caucus, including announcing last summer a version of the carbon tax without consulting them beforehand and agreeing to fast-track the conversion therapy ban without debate in the House of Commons in December. Those moves upset his social conservative and western MPs.

The CBC reported that one unnamed MP said the report lacked “integrity” because it was not critical enough of O’Toole’s personal failings in the campaigns nor did it adequately address the flip-flopping of the leader. “There was no review of the biggest liability that we had in the campaign” — the leader — the source told the CBC.

Under the Reform Act – the so-called Chong reforms, named after its sponsor, Conservative MP Michael Chong — at the first caucus meeting after an election, the caucus can vote itself several powers including removing MPs or the leader. If 20 per cent of a caucus signs a letter and submits it to the caucus chair, a secret ballot is held to determine the MP’s or leader’s fate. The Conservatives voted themselves the power to remove MPs after the 2019 election but not the power to remove the leader. After the 2021 showing, the Conservatives voted to give themselves the power to also remove the leader. (It is worth noting that no other party’s caucus has voted to give itself this power.) If a majority of 50 per cent plus one of the caucus votes to remove the leader, an interim leader must be selected immediately.

On Jan. 31, a letter signed by 35 Conservative MPs was delivered to the caucus chair, MP Scott Reid (Lanark-Frontenac-Kingston), calling for a leadership vote. Conservative MP Bob Benzen (Calgary Heritage), who supported O’Toole’s leadership bids in 2017 and 2020, said in a statement that O’Toole flip-flopped on several issues and failed to deliver on his strategy of winning more seats in the Greater Toronto Area. (The party, in fact, lost seats.) O’Toole operatives tweeted poorly veiled threats that there would be ramifications for opposing the leader and O’Toole came out that night to say the party had a choice to make: continue with his moderate position to grow the Conservatives in areas where the Tories were not popular or become “the NDP of the right” that is “angry, negative, and extreme.”

Media reports suggested that the last straw for many MPs was O’Toole allowing the conversion therapy ban to be fast-tracked and passed without debate. The move was seen as a transparent attempt by O’Toole’s allies to paint opposition to the leader as a social conservative coup. The ploy did not work.

On Feb. 2, after several hours of deliberation, the caucus voted 73-45 to remove O’Toole as leader — 14 more than the 59 needed to force his ouster. What had predicted to be a close vote was a rout. No doubt some MPs knew that it would be difficult for a divided caucus to continue under O’Toole’s leadership and voted to remove him in order to begin the process of healing the caucus rift that developed.

Leadership race is on

The National Council of the Conservative Party struck a Leadership Election Organizing Committee (LEOC) to create the rules governing the leadership campaign, including all timelines, entrance fee for candidates, and date to announce the leader. Under the party’s constitution, new members are allowed to be signed up for at least half of the campaign’s length and provision must be made for mail-in ballots. The committee is expected to release those details in early March.

Party insiders say that opinion on National Council is split, with some wanting a quick leadership race, ostensibly to have a permanent leader in place in case Justin Trudeau calls another early election. But a quick race would benefit Poilievre, who is considered a prohibitive favourite at this time. Some inside the party would also like the cut-off date for entrants to be before the June 2 Ontario general election to prevent Premier Doug Ford from entering the race. While National Council gets to appoint LEOC and provide input on its wishes, LEOC operates independently of National Council.

Three days after the caucus intrigue, the party’s finance critic, Pierre Poilievre (Nepean-Carleton), announced in videos released on various social media platforms that he would run. Poilievre’s combative style against Trudeau over economic issues and the We scandal have won support from Conservatives — and beyond — who want a more forceful opposition to the government than that provided by O’Toole.

Campaign Life Coalition released a statement on Feb. 15 titled “Can pro-lifers support Pierre Poilievre.” Canada’s largest pro-life organization stated that Poilievre, who once had a solid pro-life and pro-family voting record, was not supportable. “Tragically, he abandoned his pro-life beliefs during the previous leadership race when he was considering running, deciding that the ‘pro-life’ label was no longer useful,” said Jack Fonseca, political director for CLC. Fonseca noted that in a January 2020 interview with La Presse, Poilievre said he would not allow pro-life legislation to be introduced if he was the head of government. In that same interview, Poilievre also stated he now supports same-sex “marriage.”

Since then, Poilievre has backed up his words with votes, voting against C-233, his Conservative colleague Cathay Wagantall’s private member’s bill to outlaw sex-selective abortion. He also voted in favor of Bill C-6, the government’s ban on “conversion therapy,” a sop to the LGBT activists who will use it to criminalize parents and pastors who do not go along with the delusions of the gender confused and same-sex attracted.

Campaign Life Coalition affirmed it will “only endorse leadership candidates who are pro-life.”

Fonseca said that he hopes pro-life MP Leslyn Lewis (Haldimand-Norfolk) enters the race. She spoke to the Save Our Charities rally in November and she called out Justin Trudeau’s threat to revoke the charitable tax status of pro-life charities. Lewis was endorsed by CLC in the 2020 leadership race when she finished third but was ahead in total votes on the second ballot. Unfortunately, she lacked broad support in Quebec and did not have enough points to make it through to the third ballot in which O’Toole triumphed over Peter MacKay on the strength of down-ballot support from social conservatives who voted for Lewis and Derek Sloan.

Quebec businessman Vincenzo Guzzo has hinted he might run for the leadership. Fonseca said little is known about the owner of the Cinemas Guzzo chain, but noted that it was the only cinema chain in the country not to censor the pro-life motion picture Unplanned in 2019.

National Post columnist Tasha Kheiriddin, who supports abortion and LGBQT+ rights, has tweeted that she is considering running for the leadership. In 2005, she co-authored the book Rescuing Canada’s Right: Blueprint for a Conservative Revolution in which she and Adam Daifallah argued for jettisoning any hint of social conservatism in the Conservative Party of Canada. Rumours swirl that she would be supported by some of Brian Mulroney’s network within the party.

Brampton Mayor Patrick Brown, who was forced to resign as leader of the Ontario Progressive Conservative Party after allegations of sexual assault in 2018, is reportedly garnering support for a run. Brown double-crossed social conservatives after winning the Ontario PC leadership by flip-flopping and supporting Kathleen Wynne’s radical sex-ed plan after campaigning against it. He also brazenly marched in the Pride Parade and put MPP Sam Oosterhoff in the doghouse after the young parliamentarian tweeted support of the pro-life cause.

Media reports also suggest former Quebec premier Jean Charest and former federal cabinet minister and leadership contender Peter MacKay are entertaining the possibility of running. Despite Ontario Premier Doug Ford’s denials that he is focused on his June 2 re-election, there is speculation he is also interested in the federal job. A current hill staffer told The Interim that Andrew Scheer has lined up support for a possible run. CLC national president Jeff Gunnarson said he would have to see what commitments Scheer would make as a leadership contender this time around. When he was party leader, Scheer vowed not to reopen the abortion issue, squandering a perfect voting record as an MP.

Fonseca said that Campaign Life Coalition is “anticipating the emergence of supportable candidates” so “CLC is encouraging (supporters) to join or renew” their membership in order to vote in the leadership contest.

There is speculation among some pro-lifers that Lethbridge MP Rachael Thomas (formerly Rachael Harder) might run.

While there might not be an obvious pro-life champion at this time, it should be noted that at the beginning of the previous two races, it was not known that Brad Trost (2017) or Lewis, Sloan, Richard Decarie or Jim Karahalios (2020) would enter the race to become leader.