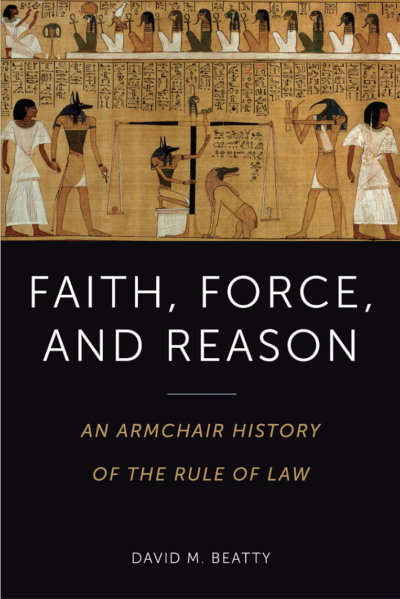 David M. Beatty, professor emeritus in the Faculty of Law at the University of Toronto, has written a truly remarkable and valuable book, Faith, Force, and Reason. In the preface he sets out his project: “This is a book about the rule of law. Its purpose is to explain, in a way everyone can understand, what law is and the method and reach of its rule.” Beatty delivers on his promise. With the general reader in mind, Beatty traces the birth of law in ancient Babylon, Israel, Greece, and Rome, and follows the idea through to the International Court of Justice in The Hague and the transition from apartheid to democracy in South Africa. Starting at the beginning, Beatty notes, the law was essential to urban living in ancient Mesopotamia. Initially the “priestly class had most of the power when it came to coordinating the lives of these original urban dwellers” and there is ample record that contracts, wills, and court proceedings were “an important part of every level of these societies.” Beatty follows the development of the rule of law from Hammurabi to Mandela, spanning nearly four millennia, with all the major milestones from Justinian’s Corpus Juris Civila to the Magna Carta, from the renaissance of the law in the Bologna and Rome in the Middle Ages to the U.S. Bill of Rights, with a cast of characters as diverse as Socrates, Hugo Grotius, and Edward Coke. Usefully, Beatty describes the three central principles of the rule of law: “rules and commands take on legal force only where they meet basic formal requirements” such as being “general, transparent, and prospective”; “the purpose of the law is to encourage people to behave respectfully toward one another and settle their conflicts peacefully”; and “the sovereignty of law is universal,” as binding on rulers as much as the ruled. The history of the rule of law is as much about the absence of it as its adherence, and Beatty notes when countries and constitutions do not quite live up to the ideal or leaders and circumstances outright banish any semblance of the rule of law.