The Statesman as Thinker: Portraits of Greatness, Courage and Moderation

Home/Politics, Reviews/The Statesman as Thinker: Portraits of Greatness, Courage and Moderation
Previous Next

The Statesman as Thinker: Portraits of Greatness, Courage and Moderation 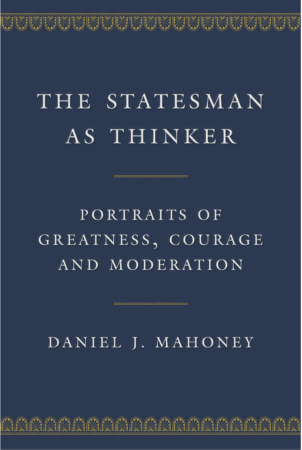 Daniel Maloney, a political philosopher whose byline appears regularly in conservative publications exploring big ideas, has written a highly readable book examining statesmanship through the lens of exemplary figures as Edmund Burke, Alexis de Tocqueville, Abraham Lincoln, Winston Churchill, Charles de Gaulle and Vaclav Havel, with insights gleaned Aristotle, Cicero, Ronald Reagan, and Margaret Thatcher. Maloney eschews the politics of power and the nihilistic bases for it provided by Machiavelli and Nietzsche, instead harkening to the ideas in antiquity that politics should be properly ordered on virtue. Maloney observes, “if one reduces every argument to a pretense for domination and exploitation, one necessarily ends with the self-enslavement of man.” Such nihilism, he argues, “cannot provide a foundation for common humanity, the civic common good, or mutual respect and accountability.” (Is it any wonder that politics is now viewed even by voters as a zero-sum game in which “owning” the opponent is more important than securing the foundations for a flourishing society?) Maloney examines how the aforementioned statesmen demonstrated magnanimity, generosity, chivalry, and other virtues to rise above mere power politics to govern or provide guidelines about how to govern for the common good. Burke said the ends of politics was “manly, moral, regulated liberty.” To serve those ends, the statesman must be sober-minded, classically educated and historically aware, and virtuous. Not perfect, for Maloney makes none of his subjects to be saints, but rather demonstrates that they strove to live upright lives. It is hard to imagine how power-hungry would exercise these virtues.

If there is one virtue that rises above all others in Maloney’s telling, it is prudence, or practical wisdom — reasoning from first principles, treating others with respect as one would wish to be treated by others, self-discipline, understanding of current conditions and historical antecedents. Prudence was necessary for Lincoln to abolish slavery and Havel to drag Czechoslovakia from communism to freedom. The cult of equality and what Roger Scruton called the “culture of repudiation” work to counter the cultivation of virtues necessary for genuine statesmanship, but Mahoney remains optimistic that we will once again see genuine statesmen-thinkers.