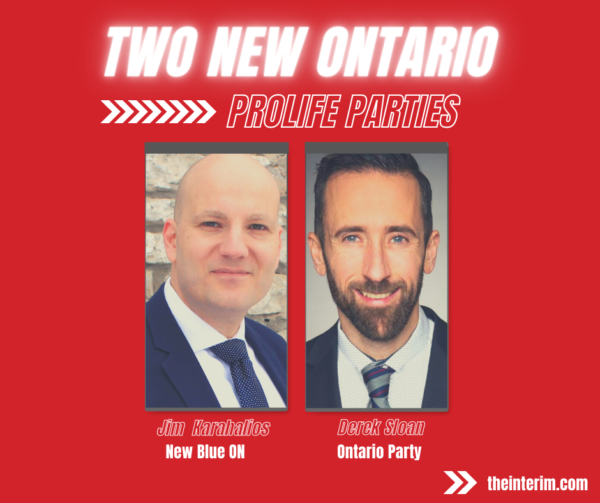 The 43rd Ontario general election will be held June 2, and Ontario pro-lifers may have more choice in supportable candidates than they’ve had since the height of the Family Coalition Party in the late 1980s and early 1990s.

In an eblast to supporters in early January, Campaign Life Coalition director of political operations Jack Fonseca said there could be three new parties presenting a pro-life and pro-family alternative on the right. While Randy Hillier is not running for re-election and his Ontario Party is not a registered party, two other parties with pro-life commitments in their platforms or founding principles and led by candidates supported by CLC in the past, are on the ballot for this election: the New Blue Party led by Jim Karahalios and the Ontario Party led by Derek Sloan.

Fonseca said in his missive that the “Ford PCs have turned their backs on us” after campaigning on numerous socially conservative values including, “repealing Kathleen Wynne’s radical sex curriculum” but the Tory premier “has turned out be an unmitigated disaster for the pro-life/family movement.” Fonseca said, “The Ford PCs have betrayed the voters who put them in power, and must be removed from office in the June 2, 2022 provincial election” because “Ford’s conservative-in-name-only PC Party has governed as a left-wing, pro-abortion, anti-family dictatorship.”

While Ford’s flip-flop on sex-ed and blocking pro-life candidates from running for the Tories are the most notable strikes against Doug Ford, Fonseca also noted that the PC Party is responsible for “Keeping abortion procedures and marijuana shops open for business through the first lockdown while at the same time, cancelling cancer surgeries and restricting church attendance” and “Piling on to publicly lynch the faithful Catholic school trustee Mike Del Grande.”

In 2020, Jim and Belinda Karahalios announced they were creating the New Blue Party; when The Interim went to press it had candidates in all but two ridings, and set up official riding associations in nearly every riding. Fonseca said, “As strong pro-lifers themselves, the Karahalios team promised to make the party open to social conservatives,” and “this gave CLC greater cause for hope.” Karahalios was disqualified from running for the Conservative Party of Canada leadership in 2020 but a court reinstated him saying the party failed to follow its own rules.

The New Blue Party has a pro-life and pro-parental rights statement as a founding principle in the party constitution: “The health and wellbeing of society is improved by strong families in which parents are the primary educators and caregivers of their children and by recognizing the inherent value and dignity of human life from conception to natural death.” The New Blue Party’s founding principles also state: “Liberty is best promoted through the ability of individuals to make decisions in their own best interests and encouraging free will (including freedom of speech, worship, assembly, association, political participation, conscience, and religion), while recognizing the responsibilities that accompany all rights.” The six-point party platform does not mention abortion or family policy specifically, but commits to school choice so parents can fight back against woke policies and to defund political parties and end handouts to liberal media to help create a level playing field.

Former MP and federal Tory leadership contender Derek Sloan announced on Dec. 14, 2021, he would also lead a new party, the Ontario Party. The party’s charter includes founding principles that recognize the right to life: “We believe that all human beings have an inalienable right to life, liberty, and private property” and, “We believe that the right to life is the most important human right, from which all other rights are derived.” It also recognizes that “the family is the basic building block of a healthy and functional society and the best place for healthy and responsible citizens to be formed. We believe in honouring parents as the primary educators of their children, and respecting the values they choose to live and raise their children by.”

One of the Ontario Party’s seven policy planks is committed to “protecting life,” in which Sloan promises to introduce conscience rights for health care workers, repeal the anti-free speech bubble zone, provide funding for crisis pregnancy centres, introduce a parental consent law for all medical procedures including abortion, withhold provincial funding to post-secondary institutions that discriminate against campus pro-life clubs, and support pregnant women who put their children up for adoption.

In its section on education policy, the Ontario Party promises to repeal the Kathleen Wynne sex-ed program and respect parents as first educators of their children.

Campaign Life Coalition has reiterated to supporters the importance of its policy of endorsing pro-life candidates “wherever they exist … If a candidate meets our criteria as being pro-life, we’ll green light them.” CLC national president Jeff Gunnarson told The Interim that pro-lifers voters should support pro-life candidates in whatever party they may find them: “Progressive Conservative and Liberal pro-lifers deserve our support, regardless of what their leaders are doing.”

Fonseca told The Interim that pro-life Ontarians must resist the urge to vote for any Progressive Conservative candidate to prevent a Liberal or NDP victory. “While the fear that Liberal leader Steven Del Duca and NDP leader Andrea Horwath could be worse than Ford is a reasonable one, we still have an obligation to vote pro-life in our local riding, and to not vote for a pro-abortion candidate,” He explained. “To cast a ballot for a pro-abortion PC candidate instead of a pro-lifer from another party only succeeds in sending the message to all politicians that we can be safely ignored and offered nothing in return for our votes since ‘they have nowhere else to go’.” He added, “If we don’t take a stand and demonstrate that we believe our vote is precious and must be earned, politicians will never offer us meaningful policy or legislative concessions.”

Fonseca said while there are many urgent issues facing the province, “the most important remains the right to life, and electing a majority of MPPs who would vote, and also act in other ways, to produce a meaningful increase in respect for the sanctity of life and the rights of children in the womb.” He said that once the “root evil” of abortion is resolved, “we will find that many of the other challenges we face, such as totalitarian vaccine mandates and censorship, will be resolved, too.”

In 2018, the PCs won 76 of the province’s 124 seats, with the NDP becoming the official opposition with 40. The Liberals were reduced to seven seats and the Green Party elected one MPP.

Doug Ford has removed more than a half dozen MPs from his caucus while in power and a total of 15 Tory MPPs elected in 2018 are not seeking re-election including three rated as pro-life by CLC.

Campaign Life Coalition’s provincial election webpage will be up and running during the writ period, but due to Elections Ontario regulations, supporters hoping to become informed about pro-life issues and their local candidates will have to pay a small subscription fee to access the information. CLC is also encouraging supporters to call its offices for information if they are not comfortable logging into the website.