Books of the Day: Fossil Fuels

Home/Reviews/Books of the Day: Fossil Fuels
Previous Next

Books of the Day: Fossil Fuels 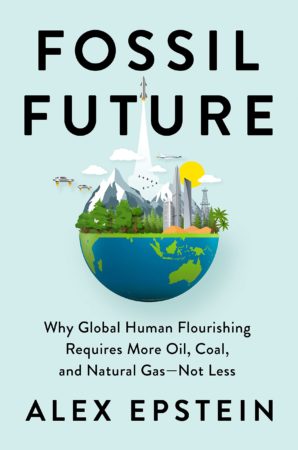 Alex Epstein, author of the 2014 bestseller The Moral Case for Fossil Fuels, returns to the topic to make the scientific and philosophical case for the continued use of fossil fuels (coal, oil, natural gas) over the preferred energy sources of environmentalists (solar, wind) to sustain human flourishing. Epstein, founder of the Center for Industrial Progress, accepts that anthropomorphic (man-made) climate change is real, but he rejects the environmental alarmism that rising temperatures present an existential threat to humanity. Abundant cheap energy contributes to the well-being of the greatest number of people: “more fossil fuel use will actually make the world a far better place, a place where billions more people will have the opportunity to flourish, including: to pull themselves out of poverty, to have a chance to pursue their dreams, and — this will likely seem craziest of all — to experience higher environmental quality and less danger from climate.” Fossil fuels provide 80 per cent of the world’s energy whereas solar and wind power account for just three per cent of energy; many poor countries still rely on dirty energy sources such as wood and dung. Fossil fuels not only make possible all of the world’s aviation and shipping, but power the vast majority of agriculture and industry, and are used in a wide variety of synthetic products (such as plastic). Contrary to the assertions of climate worriers, there is no easy way to switch to renewables.

There are two important arguments that Epstein brings to the climate change debate. The first is a wealth of physics and chemistry knowledge regarding energy production to show renewable energies like wind and solar cannot possibly replace fossil fuels. Fossil fuels are “energy dense” and therefore are easily stored and transported, and the electricity they produce can be calibrated and deployed to meet fluctuating demand. Solar and wind energy, on the other hand, lack these attributes and thus are not as affordable, reliable, or scalable. Thus, while they can supplement current electricity production, they can never replace it — it is just not physically possible. The second new argument is to identify and counter the environmental zealots’ anti-impact framework, which opposes any change in the way natural systems operate, defining any change as an evil to be opposed. This worldview exaggerates the negative effects of climate change and denies its advantages (fewer deaths from cold weather, greater agricultural yields). Such environmentalists have no interest in finding ways to live with climate change and mediate its worst effects. The economic, scientific, and philosophical arguments presented by Epstein could change the climate change debate, most importantly to make the flourishing of humanity the centerpiece of our environmental policies.