Chesterton on the Family

Chesterton on the Family

The Story of the Family: G.K. Chesterton on the Only State that Creates and Loves Its Own Citizens
edited by Dale Ahlquist (Ignatius, $17.95, 237 pages) 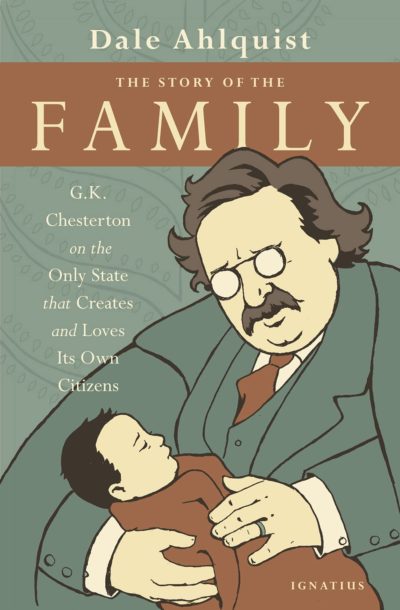 Despite writing a century ago about the maladies afflicting the family and thus the whole of society, G.K. Chesterton still seems relevant, an insightful critic of the intellectual, economic, and cultural challenges that threaten the viability of family life in modern society. I am fond of observing that Chesterton is always in season and the world needs more Chesterton, so it is good to see that Dale Ahlquist has assembled a collection of short and longer excerpts of Chesterton’s writings for a 21st century audience in The Story of the Family: G.K. Chesterton on the Only State that Creates and Loves Its Own Citizens.

Ahlquist groups the excerpts and articles in chapters covering, “The Family … and the World,” “Love … and Sex,” “Marriage … and Divorce,” “Babies … and Birth Control,” “Parents … and Public Education,” and “Home … and Work.” Each chapter begins with several pages of epigrams or brief paragraphs before delving into longer excerpts.

Chesterton raises motherhood to its rightful, exalted place in all these chapters. In the chapter “Home … and Work,” Ahlquist provides an excerpt from G.K.’s Weekly (1930) on “the equality of sexlessness” in which Chesterton says, “In almost all of the modern opinions on women it is curious to observe how many lies have to be assumed before a case is made.” One lie which was celebrated at the time was that women were being emancipated from being mothers and grandmothers as if these roles had no “positive social achievement.” Nothing could be further from the truth, and Chesterton dismisses the modern accomplishments that replace these traditional achievements.

Of special interest is Chesterton’s dissection of contraception, the contraceptive mentality, and abortion. Chesterton wrote in Eugenics and Other Evils, abortion is “the mutilation of womanhood and the massacre of men: unborn.” He wrote sardonically that contraception “stalks through the modern State, leading the march of human progress through abortion infanticide.” The slippery slope argument is vindicated by events that show so-called progress to be a never-ending slide down a dangerous, desolate, and, to those who have eyes to see, terrifying hill. Chesterton noted in 1914 a growing sentimentality about animals and predicted, “Wherever there is Animal Worship, there will be Human Sacrifice.” Abortion was practiced but not legal in the West but Chesterton saw its emergence at the service of modernity.

Chesterton celebrates marriage and family life as a natural and vibrant basis for society – “the only state that creates and loves its own citizens” — which is why he detested and argued vehemently against divorce. Chesterton had no illusions that family life is easy. In fact, it can be quite difficult (he once called it a “duel to the death”) but that is all the more reason we must work so hard to help it flourish. (It should also be noted that Chesterton advised “no man of honour should decline” said duel.) Chesterton is a delightful writer with a wonderful way with words, and thus he describes divorce: “Divorce is not an emancipation. It is a veto: because it is a veto on the most human of things—vows.” And anticipating the libertarian impulse to celebrate abortion, he wrote in Irish Impressions “the only object of liberty is life.”

The chapter “Parents … and Public Education’’ is especially important today as state-run schools substitute propaganda for teaching. Parents are the first educators and inculcating common sense and core values are among the first responsibilities of parents to their children. It is wrong to outsource this vital instruction to the school system. His description of English public education in the 1930 sounds even more apt today: “Of course, it would be worth while to pay a big price to get a well-informed people. At the present moment we are paying an abominably big price to get a more and more ill-informed people.” Nine decades ago, Chesterton warned “that all our educational experiments are in the wrong direction” because they “are concerned with turning children, not only into men, but modern men.” That describes modern education’s manias over sex education and critical race theory.

The chapter “Home … and Work” deals with the proper relationship among citizens and how it ties back into family life. Here we see Chesterton’s economic system of Distributism or economic personalism in action, in which support for small, local businesses show love for one’s neighbours, an extension of the Christian home. Echoing Marx (but with a better anthropology and sociology), Chesterton warned that many work arrangements were enslaving rather than emancipating, and that when “the individual can see the beginning and the end of his own work,” it is worth rejoicing. Modern man, Chesterton saw, became a cog in the capitalist machine and that “a clue to innumerable modern complications is precisely that the employer must come first, before even the law-giver, before even the policeman.” People are only valuable as labourers and consumers for the economy. Hearth and home suffer under such arrangements. Chesterton noticed in 1927, the connections between monopolistic capitalism, large-scale urbanization, and birth control.

Chesterton wrote in The New Jerusalem that “Every high civilization decays by forgetting obvious things.” Chesterton tries to remind readers of those obvious things as they relate to the family: faith, marriage, motherhood, fatherhood, children, school, work. Ahlquist has done a great service collecting Chesterton’s writings on these topics in one, accessible book that deserves to be read slowly – Chesterton thought the pace of “modern” life a century ago was too fast – and thoroughly absorbed … and then read again. Chesterton said that “There is an attack on the family; and the only thing to do with an attack is to attack it.” With Chesterton’s prescient writings, defenders of the family will be well armed to attack modernist assault on the family.