Home/Reviews/Saying the unsayable
Previous Next 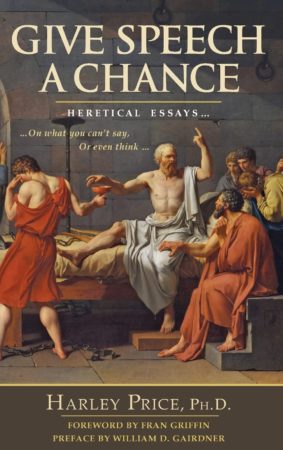 Give Speech a Chance: Heretical Essays…On What You Can’t Say Or Even Think
by Harley Price
(FGF Books, $31.25, 325 pages)

I should admit some biases when it comes to reviewing Harley Price’s Give Speech a Chance: he is a friend and occasional Interim contributor, I blurbed for his book, the author thanks me in his acknowledgements, and when he joined the Catholic Church last year Mrs. Tuns and myself were among the few people invited to the baptism. It makes some sense to repeat what I said in my blurb that appears on the back of the book: “Harley Price inveighs against every intellectually fashionable trend with acuity and wit, delving devastating blows to the pantheon of social justice and human rights: abortion, sexual promiscuity, transgenderism, atheism, and anti-capitalism.”
Price has collected his often witty, always penetrating essays that first appeared on his website Priceton.org, the Epoch Times, Catholic Insight, and The Interim over the past 15 years. William Gairdner’s preface lists bon mots and there is a deep well to choose from, including “Abortion is related to reproductive health more or less as decapitation is related to mental health” and “Progressives continue to cast themselves in the role of oppressed outsiders: victims of racism, homophobia, transphobia, ‘theocracy’ — even as the State pays for their sex-change surgeries, blesses their same-sex unions, and compels Christians to do the same against their will.” Perhaps my favourite is the understated observation that opens Price’s introduction: “As the 2016 election in the United States reminded everyone, conservatives and liberals have always had, well, their differences.” It is tempting to list more, but the book deserves attention to the broader arguments, not just the biting commentary.
Price’s essays provide evidence of the “unevenness of the contest” in the battlefield of ideas. Conservatives struggle to get their ideas heard because, as Price notes quoting Mark Steyn, “liberals don’t want to win the argument; they want to ban the argument” — including, today, criminalizing dissenting views. Price observes that liberals think that there is a “correct” opinion on every issue and they demean dissidents with a “proliferating arsenal of slanders (‘isms’ and ‘phobias’) with which liberals reflexively befoul their ideological opponents” who must not merely be silenced but punished for their wrong views, including “banishment from polite society” and the loss of employment. Constitutions that should protect freedom of speech and freedom of conscience are either ignored or twisted to squelch any trace of heresy, disagreement from prevailing political and moral sentiments that are fashioned out of thin air.
Price collects his essays in 11 chapters, covering ground such as religion, abortion, the sexual revolution, gender identity, the cult of victimhood, liberalism and conservatism, anti-capitalism, the modern academy, and the covidocracy. In each case, Price identifies with great aplomb the absurdities that replace ancient wisdom and the rush to punish those recalcitrant individuals who refuse to toe the modern line. It is no exaggeration to call the new intolerance Maoist — which Price does. He also writes (in an essay titled “The New Orthodoxy”) that progressives applaud modernity because we have moved beyond religious orthodoxy and no longer chastise heresy, yet it strictly enforces modern dogmas and punishes political heresies; any affront to the dominant politically correct bromides are ruthlessly ostracised and punished. The platitudinous positions of progressivism are “primordially religious”; debate is limited to a narrow swath of permissible views and nonconforming views are silenced and crushed. Safe spaces mean safe spaces for progressive ideas, so that progressives are protected from ever encountering opinions contrary to their own.
Price’s essays from the spring of 2020 reveal that he quickly and correctly identified the totalitarian impulses unleashed by government’s early response to the Covid pandemic: “the ugly reality of the State-manufactured coronavirus panic is that it has brought out the naked will to power of those petty functionaries who, as the Bard described them, are ‘dressed in a little brief authority’.” Price, sooner than most, questioned the covidocracy, and wondered whether it most resembled Orwell’s Nineteen Eighty-Four, a medieval leprosy scare, or a dystopian sci-fi film; in rare but minor disagreement with the author, I question why we would have to choose just one.
Price writes that “the mark of the modern progressive State is the nauseating affectation of superior wisdom and righteousness by its ruling class, which justifies it in telling the rest of us what to do, say, and think; and the advice they offer us is always backed up by the threat of violence.” The clerisy of experts and rulers, what James Burnham called the managerial class, rigidly enforces cancel culture, and under the guise of a crisis such as the pandemic, it does so ruthlessly. History demonstrates that tyranny is the norm rather than the exception in human affairs, so it is surprising — or perhaps not — that so few people recognize the ubiquity of totalitarianism.
Price favourably quotes Peter Hitchens who once said “dissent is a moral obligation.” And dissent from the smelly little orthodoxies of modern progressive terror should include purchasing and reading the heretical essays of Harley Price in Give Speech a Chance. Perhaps one more tantalizing morsel will convince you; Price observes that Washington D.C. “renamed Lafayette Park ‘Black Lives Matter Plaza,’ marked by the words Black Lives Matter in 35-foot yellow capital letters (said colour being a nice touch if you regard supine cowardice as a leadership trait).”