The necessity of tradition

Home/Books of the Day/The necessity of tradition
Previous Next

The necessity of tradition 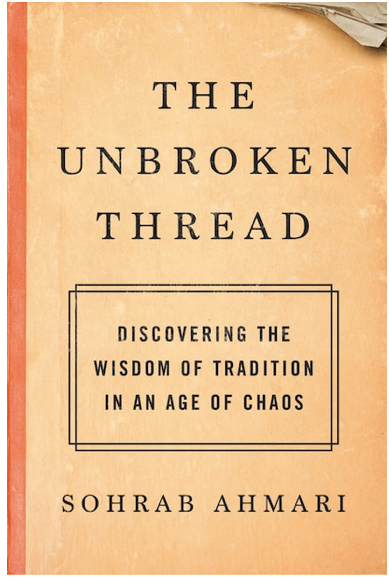 The Unbroken Thread: Discovering the Wisdom of Tradition in an Age of Chaos by Sohrab Ahmari (Convergent, $36, 298 pages)

Sohrab Ahmari has been one of the most prominent critics of the brand of conservatism best characterized as fusionism — the National Review-led unification of libertarian and socially conservative priorities in a supposedly cohesive movement. In recent years, Ahmari, the New York Post op-ed editor and First Things columnist, has questioned this old conservative marriage. He noted that while the movement produced electoral victories (Ronald Reagan in the 1980s, the Newt Gingrich Congress in the 1990s) and some policy victories for the business class, it has not accomplished much for social conservatives. We get stuck with unregulated Big Tech and Drag Queen Storytime at the public library. What goes by “conservatism” in North America today is classical liberalism — allegiance to a panoply of liberties, personal and market-oriented — that is barely tethered to what T.S. Eliot called “the Permanent Things.” The argument on the Right, New York Times columnist Ross Douthat said, looked opaque to those outside the movement, and even to many within it, but it began a round of soul-searching among conservatives about what the movement was truly about.

Ahmari, the author of a poignant conversion story (From Fire, by Water) and an excellent volume on the problem with identity politics-infused art (The New Philistines), has just released The Unbroken Thread: Discovering the Wisdom of Tradition in an Age of Chaos, which covers the same ground as much of the internecine conservative debate of which he played such a large role. While Ahmari is a gifted polemicist, The Unbroken Thread is a sobering, thoughtful examination of 12 questions the modern world not only ignores but discourages citizens from considering. Each theme is tied to a historical figure, upon whose wisdom and life story he draws to make his points. The format makes this a highly readable volume for such weighty issues.

Six questions examine “The things of God,” the other six “The things of humankind.” In “How do you justify your life,” Ahmari draws on C.S. Lewis while in “Is God reasonable,” he utilizes the life and thought of Thomas Aquinas and for “Why would God want you to take a day off,” the example and wisdom of Rabbi Abraham Joshua Herchel is used. When it comes to the things of man, Ahmari relies on Soviet dissident Aleksander Solzhenitsyn to demonstrate “What freedom is for,” while employing the feminist lesbian Andrea Dworkin on “Is sex a private matter.” This last one is a curious choice, but Ahmari has much sympathy for the anti-pornography views of Dworkin and her questioning of the 1960s’ “sex-positive” feminism. One might have preferred him to highlight a Christian writer’s thoughtful encapsulation of the meaning of sexual intercourse rather than Dworkin’s childhood abuse-stained jeremiads against sexual activity for purely carnal satisfaction. Perhaps employing a feminist icon will help the message penetrate the modern mind.

A reader should feel satisfied about purchasing the book after reading the introduction, a bracing brief for tradition. Ahmari argues — paradoxically to the modern mind — that the rules of our forefathers were not constraining, but liberating. Ahmari writes: “I have come to believe that the very modes of life and thinking that strike most people in the West as antiquated or ‘limiting’ can liberate us, while the Western dream of autonomy and choice without limits is, in fact, a prison.” The sacrifice of Maximilian Kolbe, who gave up his life in a concentration camp in order that the guards save the life of a father, represents a “moral freedom and radiated what it means to be fully human.”

Ahmari argues that “our version of freedom sprang from the European Enlightenment, a philosophical movement that ‘sought to liberate us from the dead hand of tradition’.” It “swept away” every “source and symbol of authority that stood in the way of the sovereign individual and his autonomous exercise of his reason and his rights.” Solzhenitsyn in his (in)famous 1978 Harvard commencement address, Ahmari explains, saw that the “loss of many barriers against the individual will” had “paradoxically robbed Western life of its true freedom,” for “true freedom” is “ordered to what (one) ought to have done, given his God-given talents.” Solzhenitsyn said the West “had entered a legal era, gradually replacing man’s conscience with law.”

Rather than relying on legal proceduralism, it is better for both society and the individual to have a properly formed conscience and restrictions that are beyond the writ of legislators and judges to control: “the ties that bound traditional peoples: folkways and folk wisdom, family loyalty, unchosen religious obligations such as baptism and circumcision, rule-bound forms of worship, and, above all, submission to moral and spiritual authorities.” Ahmari takes issue with the modern notion that says people are free to choose these obligations, noting that they are not a lifestyle choice, but the necessary moorings for a healthy and truly free society.

Ahmari wrote The Unbroken Thread — the unbroken thread of tradition — because of his anxieties about the sort of world in which his son Maximilian will grow up. Ahmari writes that the primary purpose of his book is “to explore the possibility that our contemporary philosophy might be wrong in crucial respects.” I am sure many Interim readers will agree with Ahmari that in many crucial respects, our contemporary philosophy is disastrous and the path to sanity and true freedom can be found in our rich religious traditions.