I read a lot. Not only for my job, but for fun so I thought I’d write about a few non-work books that I enjoyed immensely this year. 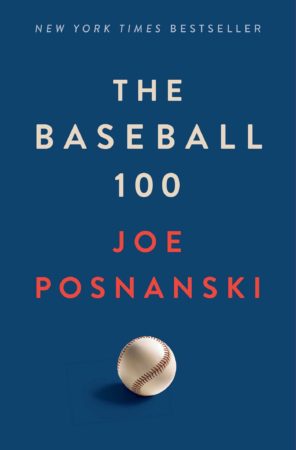 For years baseball was my favourite sport; it has since been usurped by football and I no longer watch the game that I spent years watching and listening to, but even more than that, talking and reading about. George F. Will says (in American Happiness and Discontents) that baseball is a “game of episodes, not of flow” and therefore “it leaves time for, and invites, conversation, rumination, and speculation.” A large tome by the sports writer Joe Posnanski, The Baseball 100 (Avid Reader Press, $54) comes in at 869 pages and is fodder for much conversation and rumination. Will writes the introduction and says that “baseball fans are an argumentative tribe” and Posnanski’s list is likely to begin as many arguments as settle them. As Posnanski writes, “I expect you to come hard at me with various disagreements. What fun would it be otherwise?”

Posnanski masterfully mixes his 100 stories with statistics, historical context, and informative anecdotes. The list begins with Ichiro Suzuki, and the essay on Suzuki begins with a brief against the use of the word “unique” before using precisely that label on the only batter to lead either league in singles 10 years in a row. If Suzuki’s time in the Japan Pacific League were combined with his Major League performance, his 4,394 hits would exceed Pete Rose’s 4,342. Suzuki, writes Posnanski, “is one of the very few players in baseball history whose hunger for hits came close to that of Pete Rose.”

The first part of the list feels like it over-represents recent players (Larry Walker, Carlos Beltran) and both Will and Posnanski in their separate introductions justify the inclusion of many Negro League players (Oscar Charleston is #5), but the full span of baseball is well-represented and one marvels at Posnanski’s encyclopedic knowledge of the game. It is one thing for a modern journalist to share his personal experience of meeting the criminally underrated Tony Gwynn (#95 on Posnanski’s list), quite another the capture the quiet Tigers great Charlie Gehringer (#87) who let his bat do his talking. Called “The Mechanical Man” “because he just went out and played ball,” Gehringer “never celebrated himself” to the degree that he did not even attend his Hall of Fame induction ceremony in 1949.

There is much to argue with: Pete Rose and Bob Feller not cracking the top 50, the too-cute placement of Joe DiMaggio at #56, the nearly 50 places separating Gwynn and Wade Boggs, and the under-rating of the Christy Mathewson (“who read the Bible every day”) and Greg Maddux, both in the 30s. That said, it is quite something to be one of the top 40 players of all-time for a sport with a history that goes back more than 125 years. Some will argue about players tainted by performance-enhancing drugs, but I found Posnanski dealt with it fairly. I really appreciated what he had to say about Roger Clemens (#13): “It’s almost impossible to have a pure baseball conversation about Clemens. And he brought that on himself. Any attempt to discuss his power pitching, his control, his multiple 20-strikeout games, his incredible split-fingered fastball, will fade off into a discussion of his ethics, his rage, his bullying … And here’s the reason: All his life, Clemens got away with it.” It is impossible not to interject morality because sports reveals character, or the lack of it.

These essays all originally appeared on The Athletic website but it is wonderful that they are collected in The Baseball 100 as a convenient reference book although the author would surely resist such a label. As a fan we should be less concerned whether Honus Wagner belongs one place behind Mickey Mantle (numbers 12 and 11 respectively) than we should be thrilled at discovering statistical and narrative nuggets about the greatest hitters, fielders, and pitchers to play the game. A reader might argue that pitchers are given short shrift – Posnanski takes the correct view that Walter Johnson is the greatest pitcher of all time, but ranks him only seventh – and that he undervalues fielding, which is admittedly harder to quantify. A great many fans will be irate that convicted cheater Barry Bonds is ranked third overall, behind only Babe Ruth and Willie Mays. But these are the arguments that Posnanski anticipated. Let the reading – and rumination – begin.

When I read the two volume Milton Friedman & Economic Debate in the United States: 1932-1972 by Edward Nelson (University of Chicago Press, $65 each, 1324 pages combine) early this year, I knew it would be the best book of 2021 and six months later I stand by that judgement. These books are for those with a decent under judgement. These books are for those with a decent understanding of economics, but armed with knowledge of the discipline. Nelson’s tour of Friedman’s writing and research provides a solid overview of the key issues in economics during the time between the Nobel-winning economist’s arrival as a student at the University of Chicago in 1932 and his heart surgery in 1972. While Friedman continued to popularize his economic thinking post-1972 (and Nelson plans a book covering that era), his academic research had for the most part concluded by then.

The books are usefully organized into Friedman’s “pre-monetarist” and “monetarist” periods, with each era being divided into subsections on events and activities, issues, and personalities. For an econ nerd like myself, there was a lot to enjoy here but for non-economists, this will be intellectual heavy-lifting. That said, the format makes a lot of sense and creates something of a narrative form to make Friedman’s ideas relevant to public policy debates of his day. Nelson covers it all from Friedman’s collaboration with Simon Kuznets (on professional incomes) and George Stigler (against rent control) to his 1962 Price Theory textbook and his shifting thought on the cause of inflation. Friedman began his career blaming fiscal policy (what government spent) before finding inflation is always a monetary problem (the money supply). Considering that inflation seems to be re-emerging after being dormant in recent years, it is a good time to revisit Friedman’s thought on the topic. Nelson’s intellectual biography of Friedman is a scholarly work of economic history examining a serious and influential academic.

For those looking for a more accessible book on Friedman, I’d suggest Samuelson Friedman: The Battle Over the Free Market by Nicholas Wapshot (WW Norton, $38.95, 367 pages). Wapshot, who has written biographies of Margaret Thatcher and Rex Harrison, looks at two of the most influential economists of the last century, Paul Samuelson (a Keynesian) and Milton Friedman (neoclassical). The two published bi-weekly columns in Newsweek beginning in the late 1960s to popularize their ideas. Whereas Nelson’s work focused on the economic ideas, Wapshot focuses on the lives of his two protagonists.

Samuelson’s textbook Economics was originally published in 1948 and been used in university econ courses ever since, which is the primary reason he has been credited or blamed for turning economics into a mathematical speciality rather than a story about human behaviour. Samuelson is notoriously mathematical in his writing. Friedman was more of an economic theorist, though he was also an empiricist who provided data and models to support his theories. Friedman also veered into philosophy (which he would deny) by arguing that freedom and capitalism were closely related. Wapshot is brilliant at illustrating how both popularized their ideas – Samuelson through his influential textbook, Friedman through lectures and television appearances, and both in their columns. What Wapshot’s book illustrates, more than anything, however, is that there was a time when serious ideas were debated in the public square by serious people for a popular audience. Near the end of Samuelson Friedman, Wapshot’s political biases begin to show when he states that Friedman’s influence culminated in the purist free market policies of Ronald Reagan and Margaret Thatcher. My guess is that Friedman would disagree.