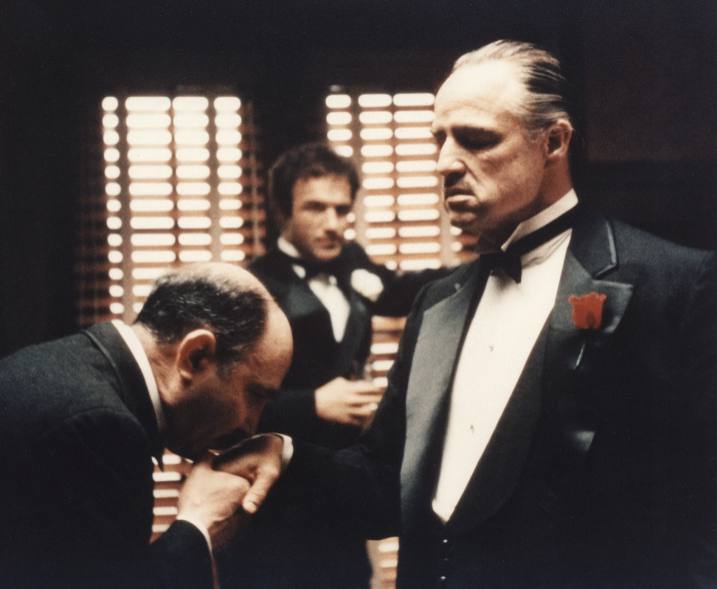 We have been living with Francis Ford Coppola’s film The Godfather for 50 years. Even more than the Mario Puzo book on which it’s based, what book can hope to resonate in what has become an increasingly visual, post-literate society? Coppola’s film has had a profound effect not just on movies, but on how a first world society built on the rule of law has come to admire, even venerate, the career criminal, and imagine that organized crime is, in the end, just a dark reflection of government, the law and legitimate business.

In “The Immorality of The Godfather,” Michael Anton’s recent essay in Compact Magazine, the crucial moral fulcrum of the movie is caught in a spotlight. After years hiding in Sicily after assassinating a drug dealer and a crooked police officer, Michael Corleone (Al Pacino) returns to the U.S. to take over his father’s crime family – and to resume his relationship with Kay (Diane Keaton), the fiancée he’d left behind without a word.

After vowing to her that he’d never enter the family business, he tells Kay that he’s working with his father now, but that she needs to understand that he’s “no different than any other powerful man – any man who’s responsible for other people, like a senator or a president.” She tells him that he sounds naïve.

As presented in the film, it’s a “wow” moment, meant to unsettle our assumptions about the purpose of power and political morality. The film so far has shown us how Michael’s father’s power comes largely from his influence over police, politicians and judges – an advantage harvested from inherent systemic corruption, and murderously coveted by rival crime families.

It sounded like the truth in the context of America after the Kefauver hearings, acknowledged mob reign over cities like Las Vegas, Jimmy Hoffa’s Teamsters, the Valachi Papers, the Vietnam War and Watergate – which Anton notes actually happened three months after The Godfather premiered. If you wanted to, you could say the film was actually prescient. In any case, nobody sitting in the theatre at the time wanted to be considered as naïve as Kay, the product of generational WASP privilege that was considered as unfashionable then as it’s irredeemable today.

There had been a wave of popular gangster films in the ‘30s, understood at the time and ever since as a cultural reaction to the poverty and instability caused by the Great Depression, as much as were the escapist musicals and romantic comedies set in glamorous high society. After WW2, gangster films became dark, gritty tragedies – film noir pictures where crime did not pay and criminals, even if they were the heroes of the story, met unhappy ends. On TV, men working for the law – cops like Joe Friday and lawyers like Perry Mason – were the good guys, full stop.

Part of the legend of The Godfather, told in books like Mark Seal’s Leave the Gun, Take the Cannoli: The Epic Story of the Making of The Godfather, is that mob pictures were box office poison at the end of the ‘60s. Paramount, the failing studio that made the film, had just endured a box office bomb with The Brotherhood, a 1968 picture starring Kirk Douglas as an American mafia boss on the run in Sicily. The genre was played out and the public was unwilling to sympathize with a career criminal, no matter how tragically he was portrayed.

Coppola had to battle with the studio during every step of production, but his biggest battle was on location in New York City, when an organization called the Italian American Civil Rights League (IACRL) began protesting the film. The League objected to any media that portrayed Italian-Americans as gangsters, and their primary goal was to “eradicate Mafia from the English language,” according to Seal.

The irony was that the League, founded by Joe Colombo, a Long Island realtor who was also the boss of one of New York’s crime families, was issuing threats against the production – union action, boycotts, pickets, pressure on actors to drop out and citizens to deny crews access to locations – that were indistinguishable from mob shakedown tactics. They’d had some success getting mobster Joseph Valachi’s memoirs banned by the U.S. attorney general, and pressuring the Justice Department and the NYC police to omit the word mafia from press releases, and the had mobilized against the publication of Mario Puzo’s book before it had even been bought by Paramount.

Paramount’s offices and workers were deluged by kidnap and death threats, and a man visited the studio’s vice president of finance with a $1 million cheque in exchange for dropping the picture. Executives were followed, their cars vandalized. Coppola and his producers thought they’d done an end run around the League when they agreed to cut the word mafia from the script – knowing that the word only appeared a single time.

After a series of negotiations with the League as good as anything in the film (Paramount+ recently released The Offer, a miniseries about the making of The Godfather), an agreement was reached, and before long it was obvious that, far from objecting to the film’s story, the mob was actually in love with their new high profile, and gangsters were vying to get parts in the picture. During shooting, the cast was even invited to dinner at the New Jersey home of a capo in the Genovese crime family. Producer Al Ruddy arranged a special screening for the New York area mob; the projectionist told him afterward that one of them had given him a $1000 tip.

After the release of the film, law enforcement doing surveillance of organized crime noticed language and phrases and even lines of dialogue from the picture showing up in wiretaps. Cast members ended up joining Puzo in receiving the attention of mobsters in restaurants and casinos – drinks and meals paid for, introductions requested; some of them found it unwelcome, but James Caan, who played Sonny Corleone, found it flattering and encouraged his new mafia suitors.

By the time The Sopranos debuted in 1999, this love affair between the mob and Coppola’s blockbuster franchise (three Godfather films have been made, but only two are worth talking about) was so established that it was a running joke in the hit cable miniseries, with characters quoting famous lines from the script, and even naming a strip club front operation after one of the film’s best ones. If the IACRL wanted to get the word mafia – or any of its synonyms and euphemisms – banished from the language, they surely failed.

I have a friend, born in Calabria, who hates The Godfather and every other mob story. He would agree with Joe Colombo and the IACRL that the popularity of mafia stories have hurt Italians, but not as much as the mafia itself, whose parasitic business model always begins with shakedowns and threats to their own community before it prospers and expands into society at large. This is the same friend who told me that, in Italian villages, priests don’t teach parishioners about a Holy Trinity that includes the Holy Spirit; the concept of a holy ghost is both abstract and sinister – they understand that family has more meaning, and so the Trinity is Jesus, Mary and Joseph.

It’s just as hard to talk about other theological concepts to the world at large, and the hardest of all is the “glamour of evil” – that fascinating phrase from the rite of baptism, which we are called upon to reject. It’s easy to understand it as a reference to material things – wealth, fame, status. But I can’t help but think of these words when I think about culture after The Godfather.

Coppola’s film was revolutionary because it focused on the Corleone family, and told their story with an elegant, stately style more associated with art films and epics. We watched a man fail to reject the family business he knows to be evil, and end up siding with him on his mission of revenge and consolidation of power, right up until the last frame, when that door closes between Michael and Kay while an underling kisses the new boss’s hand.

Good directors had made mob pictures before, but none had really made Mafiosi look sympathetic, noble and, ultimately, tragic. There was nothing new about the anti-hero, but The Godfather set him in a world where, as Seal writes, “Americans as a whole must rely on their family for what America fails to provide them, and the case of the movie that family is Don Corleone.”

Primetime is still full of undistinguished cop dramas featuring uninteresting law enforcement officers, while cable and streaming services are the home of critically acclaimed series featuring criminals who create empires; shows like The Sopranos, The Wire, Breaking Bad, Better Call Saul, Peaky Blinders and more. Talented writers and directors go where the material is rich and rewarding, and create fascinating, nuanced, stories full of flamboyant, spectacular villains and criminal protagonists who we root for even while they wreak destruction and death, season after season.

In his essay, Michael Anton describes a crisis in prosperous, civilized, democratic countries – a loss of faith in institutions where “the implicit premise seems to be that one can have America or – but not and – family, church, homeland, tradition, music and much else.” This world existed when Coppola released his film and – whether it was a self-fulfilling prophecy or not – it’s the world most of us have resigned ourselves to living in. Fifty years on, we act as if this was inevitable – that accepting this world was, to quote one of the film’s greatest lines, “an offer we couldn’t refuse.”