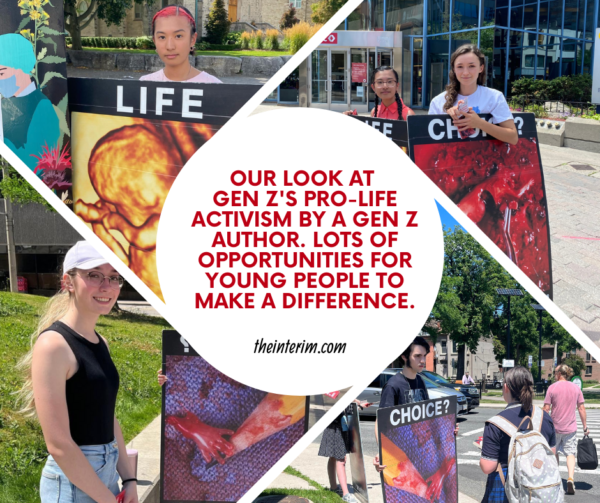 The fight for preborn life is an all-encompassing, multifaceted battle, materializing on different levels across all social strata. The modern pro-life activist is someone who must battle politically and legally, all the while making sure to keep up a positive, life-affirming outlook. Although the bulk of this half-century battle would seem to fall to Baby Boomers, the generation for whom abortion was legalized, increasingly the pro-life movement is making its way into more youthful hands.

Gen-Z, short for Generation Z, is defined as the group of people born between the late ‘90s and the early 2010s. Youngsters, who as of 2022, would find themselves between the ages of 10 and 25. In a hostile world where cancel culture reigns supreme, threatening to socially ostracize and “dox” cultural dissidents, these fresh-faced, young Gen-Z activists need to be staunchly committed to their life-loving principles to take a public stand.

Mississauga Right to Life board member Yara Bashoory, a 17-year-old Grade 12 student, is responsible for exciting pro-life activities for adolescents in her area as the organization’s youth liaison. She coordinates with youth leaders from other pro-life organizations, local schools and their chaplains. In her experience, pro-life Gen-Z are devoted, through and through, to the cause. “Baby Boomers were sold on polarizing ideas, and in many ways, they were allowed to be ‘wishy washy’ with what they thought about abortion. This generation is more pro-life than previous ones because there is more at stake now. You’re either in or you’re out. You have to really believe what you think. It’s difficult, but it’s worth it.” Bashoory said, “Even if you’ll lose a lot being publicly pro-life nowadays, you would be saving kids.”

The Mississauga Area Right to Life, founded about the time that the Pierre Trudeau government decriminalized abortion in Canada in 1969, is involved within the community, and especially among youth. In 2018, they hosted a youth symposium and, later on, a conference introducing students to the impacts of emerging euthanasia legislation. Both events attracted around 200 students. Of note, through the coordinating efforts of Right to Life, there is a pro-life flag on display at the John Cabot Catholic Secondary School in Mississauga. This past February, they hosted a brain-storming session which attracted 26 youth and pro-life leaders to think up ways to engage the community in the future.

This generational moral integrity that Bashoory speaks of can be summed up by contemporary idiosyncrasy, largely owing to the medium through which modern-day activism unfolds. The most limit-pushing, conviction-testing confrontation occurs on social media platforms, in a sort of “trench warfare” style. Online, there is little ground to claim, yet each side tries to advance their agenda, gaining more “ground” through new follows. On Instagram, there is a number of pro-life accounts that curate visually appealing and shareable content for zoomers, among whom are prolife_canadian, prolife.ig, prolifeprotruth and prolifeofficial. Although not every pro-life youth has a social media account dedicated to pro-life evangelism, many show their support through liking and re-posting on their stories.

Nationwide, well-established pro-life groups like Campaign Life Coalition in Canada and Live Action in the U.S., make use of social media, curating informative and relevant content mostly on Instagram and TikTok, though Facebook and Twitter are also used for those who skew older in the demographic. Through the media, these organizations visually show the reality of abortion. With the truth on constant exposition, youth are also kept informed on politics and new legislation, as they are encouraged to become tangibly involved within the movement.

The ideological reining of recruits online spills into in-person activism. Since abortion’s legalization in the ‘60s, pro-life groups have had to adapt creatively with their advocacy. Cam Côté, the western outreach director for the Canadian Centre for Bioethical Reform, avows that it’s easier to be “emboldened” now than ever before, which strengthens young activists in their pro-life commitment.

“Gen-Z recognizes that the status quo is overrated. There is an attitude of engagement in this generation—even among pro-aborts. Things like creating your own narrative and ‘blazing through’ are very appealing. This is why Gen-Z — over any other generation — is willing to engage in pro-life activism,” said Côté, a full-time CCBR employee since 2012.

As outreach director, Côté, co-host of the Pro-life Guys podcast, organizes activities for CCBR’s interns, most of whom are Gen-Z. Young activists engage in conversations on the street, the effects of which are measurable and positive.

“There is a focus on high-level training on how to successfully interact with people. We teach them how to have effective conversations on where life begins and how to refute bodily autonomy arguments. We focus a lot on application. Our interns are outside delivering pro-life literature four mornings of the week, door knocking, and participating in Choice Chain.” Côté said “we’ve been able to track our progress,” and that 25-30 per cent of people they engage with “become fully pro-life.”

The Gen-Z response at Life Chain, the annual prayer and life-witness Sunday, is mixed. Zone captain for Yonge/Eglinton Clinton Somerton said that there are no participants aged 25 or younger, although attendance is usually poor in the midtown Toronto location. The Bloor/ Islington intersection in west Toronto, organized by Bob Shiley, usually attracts 35 participants, four or five of whom fall within the Gen-Z cohort. Of all those interviewed, the greatest Life Chain participation is seen at the Dufferin/Steeles location. Captained by Lino DeFacendis, it boasts over 250 attendees, with a few dozen full-fledged zoomers. Interestingly, DeFacendis said that many youth attend with their families, who are associated with St. Joseph the Worker parish in Thornhill.

Pastor Bill Ruminas, from the Tuscarora Indian Mission, runs 40 Days for Life in Buffalo, New York. Based on previous-year attendance records, he expects a turnout of approximately 60-70 people, 12-25 of whom will be Gen-Z, for the 40-day prayer campaign this fall. “Some Gen-Z are very dedicated. One girl used to take the bus an hour and a half each way to pray outside an abortion mill in Buffalo until we started the Niagara Falls 40 Days for Life a couple blocks from her home. Other than the university kids, our largest contingent comes from a house church or home school that wanted to expose them to boots on the ground pro-life prayer presence,” he said.

Niagara West MPP Sam Oosterhoff believes that the pro-life movement in Canada is “increasingly young and diverse.” He adds: “Interestingly, it is not just people with a particular political orientation who identify as pro-life; I meet young people from across the political spectrum who share their pro-life convictions but are often not even big-C conservative.”

Oosterhoff, now a father, links this to a growing awareness of the inherent dignity of human life. “There is an increase in young pro-lifers because of a recognition that human rights matter, and that the most foundational human right, which serves as a prerequisite to all other human rights, is the right to life,” said Oosterhoff. “Additionally, Gen-Z recognizes the importance of being a voice for the voiceless and speaking up for marginalized communities. Children in the womb truly have no voice to speak for themselves, and that is serving as an impetus for young people to speak for them.”

“All of my friends in the conservative movement are pro-life and chose to vote for Leslyn Lewis, the sole pro-life candidate in the party leadership race. Although every major party wants the abortion debate in our country to remain “closed,” only through our success in entering the political sphere can we make significant progress towards our ultimate goal: making abortion unthinkable in Canada.”

In the Ontario provincial election in June, two former Campaign Life Coalition interns ran for office under the Ontario and True Blue party banners. In a previous interview with The Interim, they both cited what they learned through the CLC internship as contributing factors to running for public office.

CLC Youth offers young people multiple ways to get involved in pro-life activities, from providing social media content to street activism, from hosting virtual pro-life meetings to volunteering for pro-life political candidates. Each summer, CLC hires and trains nearly a dozen high school and university students, and they get involved in street activism, political work, and research and writing.

CLC national president Jeff Gunnarson says “youth are not a farm club for the pro-life movement but a vital and active part of its pro-life witness in all spheres of pro-life activity today.”