Canada provides warning to the world on euthanasia

Canada provides warning to the world on euthanasia 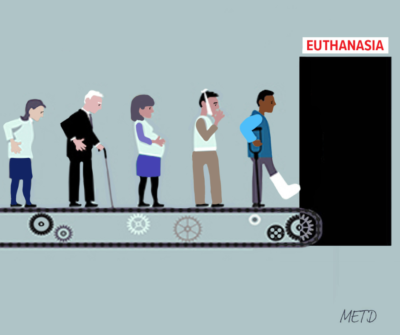 Canada and California have roughly the same population and both jurisdictions legalized euthanasia in 2016. In 2021, California killed 486 people by euthanasia while Canadian doctors medically killed 10,064 patients. Canada is killing people through its system of Medical Assistance in Dying at about 20 times the rate as California’s euthanasia regime. In Canada, one in 25 deaths is deliberately caused by physicians under MAiD, a level that the Netherlands took decades to get to, Canada reached in six years. In Canada, we have normalized euthanasia as regular health care, with devastating results.

The Supreme Court said in its 2014 Carter decision, that Canada would not slide down the slippery slope. Politicians and euthanasia activists scoffed when pro-life leaders, religious representatives, and disability rights’ activists warned that once the Pandora’s Box of euthanasia was opened, it could not be limited to some small group of people, but would quickly broaden to inclusively kill many more people whom the law initially sought to protect through safeguards. The logic, however, is that if a medically assisted suicide is a right for one person, any so-called safeguard is, actually, a form of discrimination preventing others from exercising that right.

Of course, we strenuously oppose the idea there is a “right to die” — it makes little sense to exert a right that will happen to everyone whether they want it or not. We likewise do not bend to the altar of personal autonomy that says only by dictating how one exits this mortal coil can death be dignified. Dignity is how we face the inevitable reality of the end of our physical life on earth.

What is a tad surprising is that the descent into euthanasia hell happened so quickly, its excesses became public, and forced the world to take notice. From the Washington Post and Newsweek to the Daily Mail and (London) Spectator, media outside Canada have been pointing to the dangers—not really abuses, but actually threats to human life—present in the country’s euthanasia regime.

The law seems to be violated when there are routine reports about euthanasia for social reasons. Poverty is not an irremediable health condition, which the law states is a perquisite for accessing euthanasia. There are at least six stories out there about military veterans being offered euthanasia even though those sick and disabled were seeking life-affirming accommodations, not an end to their lives. There have been numerous media reports of “patients” who have been approved for a medicalized killing because of the lack of financial support: people with severe allergies who cannot be easily accommodated in public housing; people worried about paying the rent; and people who are lonely or need some help getting the groceries and putting them away. These are not failings within the health system – although there are numerous of those cases, too – but easily solvable social problems that are routinely being addressed when they become public. But what about the cases that do not become public? How many people are being killed by physicians for want of a slightly different housing situation or some decent neighbourliness? It is unconscionable that doctors are approving these requests for euthanasia.

Canada cannot pride itself as a caring country when people are denied access to the  very things that would make their lives more tolerable, leaving the vulnerable feeling they have no choice but to have a medical professional end their lives. A cynic might wonder if the goal is to terminate inconvenient lives. But with growing federal and provincial debt and the likelihood of social programs being squeezed in the near future, one need not be a conspiracy theorist to see how the state might view euthanasia as a solution to future spending problems. It is already occurring.