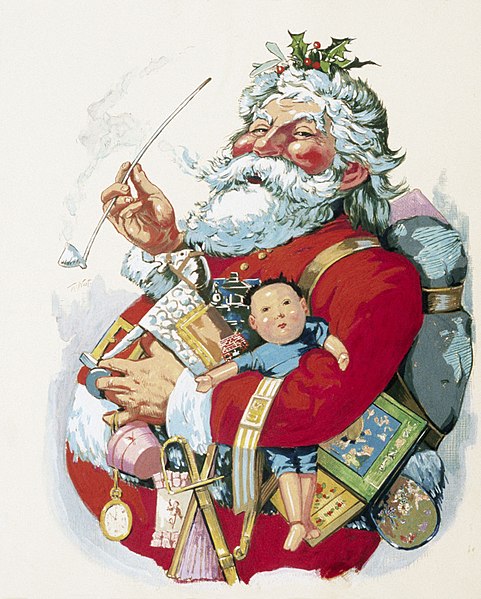 Have you heard the news? Santa Claus is nearly here!

Santa’s sleigh is always led by eight tiny reindeer, you know – and guided by Rudolph’s shiny red nose, of course. The elves are making oodles of toys for all the good little girls and boys. Santa will take his gigantic bag down every chimney in sight…and…and…

There’s no need to tell you this. Your children and grandchildren have already let you know about Santa’s magical sleigh ride from the North Pole dozens of times. And you all know the story about Jolly Old Saint Nick.

Some people are aware of Santa’s evolution from Christian saint to jolly old fat man. Most probably aren’t. So, gather ‘round the fireplace, ye merry souls, and I’ll tell you the story of how Santa Claus came to be.

Santa Claus’s origins date back to Saint Nicholas of Myra (or Nicholas of Bari). He was born into a wealthy Greek Christian family on March 15, 270 in the Turkish coastal city of Patara in the Roman Empire. He was a Christian pastor who gave away his money to the poor, helped the hungry and infirm, saved individuals from execution, and performed miracles.

What he’s most well-known for is something your young ones (and a few older ones) are anxiously waiting for—presents!

“The historic 4th-century Greek saint had a reputation for secret gift-giving, such as putting coins in shoes left out for him,” wrote Museum of Arts & Sciences education associate Nicole Messervy in a Dec. 13, 2017 piece. This act of generosity led to Saint Nicholas being known as “the patron of children (who) is associated with giving gifts to children.”

Saint Nicholas’s legend became the historical model for Sinterklaas, or Sint-Nicolaas, in Holland. Sinterklaas is one of the earliest examples of today’s Santa Claus. He was traditionally depicted as an older, stately and serious man with white hair and a white beard. He wore a long red cape and red stole, as well as a red mitre and ruby ring, and held a golden crosier. He rode a white horse, and was accompanied by Zwarte Piet, a black Moor from Spain, who carried a bag of candy for the kids on Saint Nicholas Day.

Saint Nicholas and Sinterklaas’s European roots didn’t have the same historical impact in North America. Yet, Penne L. Restad’s Christmas in America (1995) highlighted an intriguing Dec. 23, 1773 piece in Rivington’s New-York Gazetteer, which mentioned the patron saint’s anniversary, “otherwise called St. a Claus,” as having been observed by “a great number of Sons of that ancient Saint.” It was the first brief reference to a last name that makes young children smile and laugh with glee.

The U.S. had the biggest impact on Saint Nicholas becoming Santa Claus.

In the last volume of Washington Irving’s seven book series, Knickerbocker’s History of New York (1803), Restad wrote, “Never were stockings better filled on the eve of blessed St. Nicholas” and “every house was a temple of the jolly god.” Messervy suggested this was “the first time that we see St. Nicholas being referred to as jolly figure.” The following year, John Pintard founded the New York Historical Society and “promoted St. Nicholas to a patron saint of both the society and the city.” Pintard commissioned Alexander Anderson, one of America’s great early illustrators, to draw an image that was handed out to guests at the first anniversary dinner. “In Anderson’s portrayal, he was still shown as a religious figure who left gifts in fireside stockings and was associated with rewarding the goodness of children.” This was followed by Clement C. Moore’s famous 1822 poem “A Visit from St. Nicholas,” later called “The Night Before Christmas,” which was heavily influenced by Irving and Anderson’s depictions.

This brings us to Thomas Nast, the brilliant American editorial cartoonist and illustrator who provided the most important artistic contribution to Santa Claus.

Nast, who was of German heritage and knew the story of Saint Nicholas, launched a “thirty-year project to create an entire world for Santa,” Restad wrote. It started with his magnificent Dec. 25, 1866 cartoon “Santa Claus and his Works” for Harper’s Weekly. This larger-than-life character was originally – and surprisingly – crafted as a “figure so short that he needed a chair to reach the fireplace mantle.” He was also portrayed with a large book (to determine who’s been naughty and nice), Christmas tree, toys and, in a redrawn version, his “characteristic dress, a bright red suit trimmed in white ermine.”

Nast’s most famous Santa cartoon is “Merry Old Santa Claus,” which appeared on the cover of the Jan. 1, 1881 edition of Harper’s Weekly. He’s smoking a large pipe, has holly on his hat, books and toys under his arm, and a huge smile on his face. If there’s one image of Jolly Old St. Nick that’s known the world over, this might be it.

The history and evolution of the real Saint Nicholas to the fictional Santa Claus is a fascinating centuries-old tale. No matter what he looks like, and how much he’s changed, he’ll always have a place in our hearts and our lives.

Michael Taube, a columnist for Troy Media and Loonie Politics, was a speechwriter for former Canadian prime minister Stephen Harper.