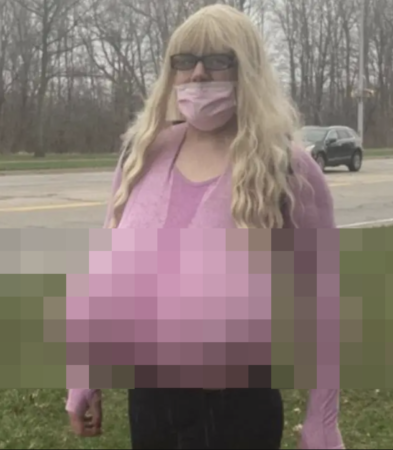 After Reduxx Magazine reported that a student filmed a 20-second video of a shop teacher at Oakville Trafalgar High School that goes by the name Kayla Lemieux, there was international attention on the case.

The video shows Lemieux wearing a pink shirt with obviously fake breasts that hang below his waist, with nipples clearly protruding. It appears that Lemieux is also wearing a large blond wig. Jonathan Kay wrote on his Substack that Lemieux was wearing, “the sort of ridiculous costume that our great-grandparents once might have seen in R-rated vaudeville shows, but which now are primarily associated with computer-generated pornography (in particular, what the Japanese call Bakunyū —literally, ‘exploding milk/breasts).”

Parental rights groups called for the “groomer” to be relieved of his classroom duties.

Campaign Life Coalition launched a petition to the HDSB calling for the “immediate termination of ‘Kayla Lemieux,’ formerly named Kerry Lemieux,” noting he “has been flaunting a recent ‘gender transition’ by presenting himself with highly exaggerated and sexualized feminine features before distressed students.” CLC said that students are “being daily exposed to a form of living visual pornography in his fetishized dress and self-styling.”

Teresa Pierre, president of Parents as First Educators, said in an email to supporters: “Any right-thinking school board would have removed him from his position in the classroom by now, but the Halton school board has only conceded that they will look at their dress code policy.”

The school board said it will look at whether the costume violates the school’s dress code which bans wearing cloths that “exposes or makes visible genitals and nipples.”

One unnamed student said in a report on Lemieux, “The kids here most definitely don’t think it’s normal,” noting their helplessness to do anything about it: “realistically we can’t say anything … last year, the teacher was a man. I don’t think the school can fire him.”

Indeed, the school’s principal, Meredith Cammisuli, stated in a letter to parents, “Gender identity and gender expression are protected grounds under the Ontario Human Rights Code,” as it “took the opportunity to reiterate to our community that we are committed to establishing and maintaining a safe, caring, inclusive, equitable, and welcoming learning and working environment for all students and staff.” The board reiterated the same points in comments to the media.

Kay, in his Substack essay, said he supports individuals who identify as transgender teaching in classrooms as long as they comport themselves properly, which he claims most do. But Lemieux, said Kay, is “subjecting (students) daily to the unsettling spectacle of presenting as a grotesquely fetishized caricature of a woman.”

True North’s Susan Levy, who identifies as lesbian, wrote, “At first, many Twitter users believed the pictures to be a parody given their outrageousness.” But the school and board have confirmed the video was authentic.

Kurt Mahlberg wrote about the story for MercatorNet, noting: “Five minutes ago we legalised same-sex marriage on the assurance that a slippery slope towards perversion would never materialise. Now grown men employed as teachers are living out their sexual fetishes in front of adolescent students—and schools are defending it.”

Fox News host Tucker Carlson highlighting the story twice, taking issue with the school and board’s protection of the teacher, saying Lemieux is “a dangerous creep” because he is “enlisting children in his sexual fantasy.” Carlson further explained, “This man is free to wag his prosthetic breasts in the faces of kids because he gets off on it. It harms children because it sexualizes them.”

Lemieux had his defenders. The Globe and Mail ran a column by Phoebe Maltz Bovy claiming that critics were “body shaming” the transgender teacher.