The high calling of criticism

The high calling of criticism

The Critical Temper: Interventions from The New Criterion at 40 edited by Roger Kimball (Encounter, $39.99, 561 pages) 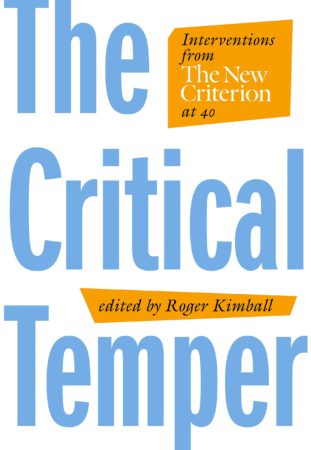 The idea of the culture wars is much derided by pundits, often considered distractions from real issues. I would argue there is nothing more important than to go to (metaphorical) war over than culture. A field general in the war over high and middle brow culture over the past four decades is the indispensable monthly journal The New Criterion, founded by former New York Times arts critic Hilton Kramer as a sort of ancestor to T.S. Eliot’s publication, The Criterion. Kramer, Roger Kimball (the current editor) and a legion of serious critics have been celebrating that which is great in the visual arts, literature, theatre, and music, and chastising the mediocre (or worse), and they occasionally collect these essays in chrestomathies, the most recent on the 40th anniversary of its founding, The Critical Temper: Interventions from The New Criterion at 40.

The new collection features some of the best essays of the last 15 years (since the publication of its 25th anniversary volume) — some polemical takedowns of charlatans that need to be brought down a peg or two (or ten), others resuscitating the reputations of people that the current generation of curators and gatekeepers have unceremoniously buried or condemned as … gasp! … dead white male.

The criticism offered is not merely aesthetic, but addresses what Socrates called “the right conduct of life.” Thus, Kenneth Minogue writes that freedom means “the capacity to not only choose but also to face the consequences of one’s choice.” Mark Steyn wonders “What happens when, as a matter of state policy, you debauch your human capital?” before noting that rampant drug use and sexual promiscuity, the normalization of out-of-wedlock births, and the decline of marriage is turning citizens into dependents as western democratic capitalist societies squander their civilizational heritage.

Defending our cultural inheritance from the barbarians and vandals of the Left requires a certain confidence in not merely the arts but in assessing quality beyond questions of whether the artists fits the identity politics mold of black/female/gay is good, white/male/straight is bad. Joseph Epstein in his ringing defense of the “cult of James” takes on what he calls the Henry James Homosexual Project that recruits the author to the homosexual lifestyle through the faintest hints of repressed homosexuality or relationship with such a practitioner.  “What is behind the need to turn Henry James into a severely repressed homosexual?” on such scant evidence. Epstein offers a number of possible explanations when only one is necessary: to make the novelist’s literature de rigueur to read in the early 21st century when authors and not their works are deemed readable. Epstein has little time for the playing of identity politics with literature, noting that James is “perhaps as complete an artist as the world has ever known”; why bring up his presumed proclivities? “For James,” Epstein writes, “literature was wife and mistress both.”

There are so many choice criticisms and appreciations to choose from, but two will provide a feel for the full volume. Kyle Smith lambastes Harper Lee’s To Kill a Mockingbird and Aaron Sorkin’s Broadway adaptation, noting that the novel is a “totem of the patronizing, condescending, dehumanizing, mindset of white liberals when it comes to race” and that “liberals don’t see its dramatic flaws and don’t see that its final message is damning rather than reassuring.” That is a refreshingly honest evaluation of Lee’s work. Alexander McCall Smith writes about “Beauty locked out” and notes that while visual arts and music permits joyfulness, while novelists are “expected to eschew optimism and affirmative register if we wish to be taken seriously.” Cynicism is rewarded today by what passes for the literary press and the dull, stultifying professors of literature.

In his introduction, Kimball says “Criticism is serious business, because life is a serious business.” And the well-lived life – the life of the mind – should include high- and middle-brow culture, not merely popular entertainment. If there is a silver lining to the present cultural decay, it is that intelligent readers have The New Criterion as a guide for the dumbed down and decadent cultural industries.