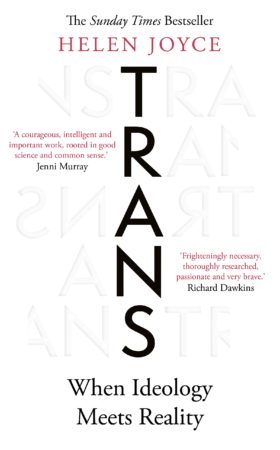 Helen Joyce’s Trans: When Ideology Meets Reality delivers exactly what the subtitle promises, juxtaposing the trans ideology with biological facts. Joyce begins her examination of gender identity in Weimar Germany where the discredited Institute of Sexual Science, founded by the gay Jewish drag queen Magnus Hirschfeld, offered hormones and surgery for those seeking to change their sex. (Interesting tidbit: the Institute’s sex-change surgeon, Dr. Erwin Gohrbrandt, would later conduct lethal experiments at Dachua.) Hirschfeld believed everyone was both sexes because male and female were (he claimed) mere abstractions. Another discredited scientist in the transexual movement in the 1960s was Dr. Harry Benjamin, an endocrinologist who had earlier sold testosterone and vasectomies as anti-aging treatments. One hopes that someday in the future, the mania that leads some parents to knit “packers” — soft prosthetic penises so gender-confused girls can have a bulge while they pretend to be boys — will be viewed as the sort of quackery that so many of the movement’s charlatan pioneers are now seen as. Such hope would require a massive dismantling of the ideological underpinnings that have ensnared governments, schools, academia, businesses, and even some churches, much of which is detailed in Trans.

Joyce provides a basic science lesson that essentially comes down to reproductive capacities. She blames radical feminism’s denial of real differences between males and females — that stereotypical gendered-behaviors have no basis in physiology and only reflect the imposition of such roles in historically patriarchal systems — for setting the stage for the trans ideology that likewise finds no meaningful difference in the physiological distinctions of the sexes. The cost of succumbing to the ideology is clearly illustrated in a chapter on “We just need to pee” which draws on the Canadian experience of allowing self-identifying trans men to choose women’s prisons despite the obvious danger that biological men would present to actual women. Worse, Joyce notes, is the ideologically motivated insistence on remaining blind to these dangers: “No one in authority is even counting them, let alone tracking the harm done to female prisoners.” Trans makes the case that trans ideology erases women by denying what makes the female feminine. It is a timely and necessary book.