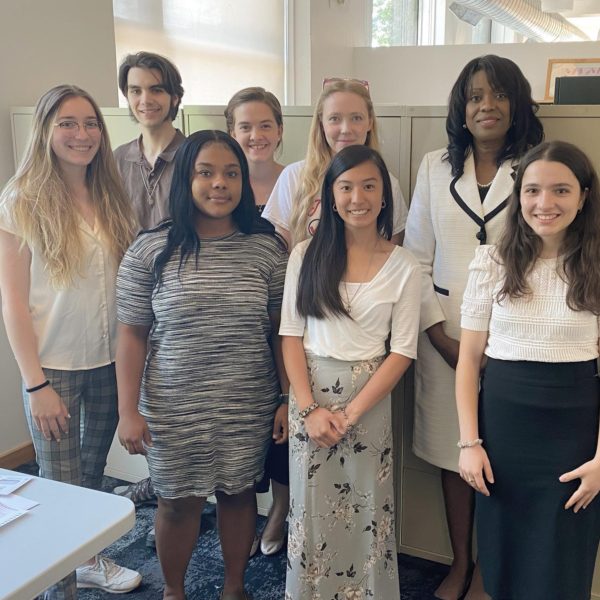 Conservative leadership candidate and MP Leslyn Lewis (Haldimand-Norfolk) made an appearance at Campaign Life Coalition’s (CLC) headquarters in Hamilton as part of a southwestern Ontario tour in mid-July for a quick meet and greet with this year’s summer interns.

The visit to the young pro-life activists followed a breakfast at the MacDonald-Cartier club in Hamilton to discuss her platform with local residents.

The politician’s opening remarks to the students addressed to the youth commented on the difficulties of being publicly pro-life in today’s political landscape.

“I’m so inspired by you,” Lewis told them. “Even for me as a politician, it’s hard for me to be publicly pro-life.” The lawyer and managing partner of Lewis Law in Scarborough, said, “I have already had my career being established and built-up, so I can’t imagine how it is for you youngsters, continually fronting the threats of cancel culture.”

After her opening remarks, she opened the discussion for questions. Lewis was cross-examined by the interns, who inquired about her positions on current socio-political issues from abortion to freedom. Said one student, Lewis lived up to her CLC greenlighting in the leadership race.

On abortion, Lewis was unequivocally pro-life and vowed to cut funding for overseas abortions in developing African nations. “I would actually listen to those countries being funded who are on the African continent,” said Lewis. “Abortion is not part of their culture, it’s almost a form of imperialism on our part. We should listen to them. I don’t think we should cut health care funding, but it should definitely not be attached to abortion.”

She commented on conservatives like Andrew Scheer, who claim that they are “personally pro-life,” but vow never to reopen the abortion debate.  Lewis said, “The abortion debate has never really been closed. If you ‘close it,’ you are going to silence millions of people. You are basically saying that there are things we can talk about and things we can’t talk about.” She said, “Policy comes out of having conversations. If you say that you’re not going to open a debate, you’re saying I’m not going to listen to you, which is fueling our cancel culture narrative.”

When asked if she thinks other conservative candidates really mean what they say about abortion or if they campaign on pro-abortion talking points simply fearing media backlash, Lewis remains skeptical: “If you say I believe in a woman’s right to choose, then tell me why you haven’t fought for legislation to entrench that right? Explain that to me. Why haven’t you said you want a law protecting that right? It’s just a virtue signal. They don’t believe in that. They are just afraid of being labelled anti-woman.”

Lewis said politicians often talk about issues without doing much about them. “This is the same narrative of why we’re not standing up to the climate change agenda that’s really a social experiment because it’s not addressing real issues with the environment,” Lewis said. “We haven’t brought down emissions with these policies, we’ve just controlled people’s lives. People are not pushing back on it because they don’t want to be labelled a climate denier and they don’t want conversations on what net-zero is. This is the same thing being done with the abortion debate, I don’t believe one word of what they’re saying.”

Lewis argued that the biggest issue facing Canadians is national autonomy: “Global organizations have stated their agenda, that is, ‘own nothing be happy.’ This is something which is antithetical to Canadian society. People should see the material value of their labour. When we have organizations with that agenda, when we have a government funding those organizations, that’s cozying up to those them, we have an issue with our sovereignty. Then, we have a post-nationalist state.”

Intern Rain Tolentino, 16, told The Interim her summer colleagues were excited by Lewis’ office appearance.  “I found it so cool how she was addressing us as the future leaders of the pro-life movement,” said Tolentino. “Even if we are in a position to be cancelled or be labelled as anti-women, she encouraged us to keep doing what we are doing. It made me feel that we’re doing something worthwhile in this fight,” said the young activist.

Although touched by the supportive message, Tolentino was most impressed by Lewis’ fortitude. “It was so refreshing to see a CPC leader as firm in her beliefs as she was. You can tell that she has a backbone, which is more than you can say for some other Conservative politicians today. She wants to do what she thinks is right and that is something really admirable.”

“First politicians love to kiss babies and pose for pictures, but she came also because CLC has supported her for many years,” Gunnarson told The Interim. “We advised her on how to deal with hostile pro-abortion media and politicians. We’ve also put a lot of stuff in support of her on the CLC youth channel, so she was pleased to meet the young people behind it.”

“Of course, she is happy to see young people engaged in any political venture, let alone a pro-life one. It’s fantastic to see young women and men tackling this controversial and profound pursuit,” he said.

After the in-office visit, intern Kim Headley thinks that the only pro-life politician in the running has what it takes to win.  “Her answers to my questions were good and well thought out,” Headley told The Interim. “She was also very kind and respectful to us interns. I think she has what it takes to win because she is willing to look on both sides and find common ground, which is something you need as a prime minister,” said the 27-year-old.

Lewis’ final words left the interns motivated to continue their work and keep up the “good fight”.

“I admire all the work you do—it’s so inspiring. This generation is so misguided and confused, and you are the youth who will lead us into tomorrow. Thank you for being courageous.”