An economist tackles the tough decisions in life

An economist tackles the tough decisions in life 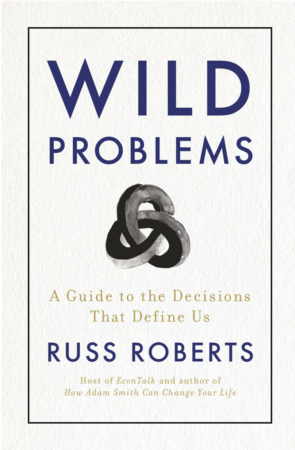 Russ Roberts is the host of the EconTalk podcast, author of numerous books about economics, and president of Shalem College in Jerusalem. After spending most of his life applying the rules of economics as taught at the University of Chicago — the importance of trade-offs and opportunity cost (what we give up to gain something) — he has, recently, turned his eye more to questions that resist measurement. In Wild Problems, Roberts examines the questions in one’s life that are not easily answered by making a list of pros and cons to rationally tabulate which outcome would be optimal from a utilitarian point of view (maximizing pleasure, minimizing pain). These are the “big decisions in life” such as “whether to marry, who to marry, whether to have children, what career path to follow, how much time to devote to friends and family, how to resolve daily ethical dilemmas” — the “fork in the road of life where knowing which path is the right one isn’t obvious.” These are decisions that define who we are.

A running example throughout the book is Charles Darwin’s pro and con list of whether to marry. Darwin listed among the benefits of marriage “children,” “constant companion” and “someone to take care of house” while the benefits of not marrying included “not forced to visit relatives” and not having the “expense and anxiety of children.” The problem with this approach is properly weighing the costs and benefits; Benjamin Franklin encouraged a friend to guess the relative weights so a simple tabulation of the number of pros and cons doesn’t ignore the outsized benefits or costs. Spelling out such a decision this way appears rational but it is not; it is an obviously silly, perhaps even futile exercise. While Darwin could reasonably expect that children do, indeed, present increased expenses and anxieties, a non-parent cannot fully appreciate the immense joys that children incite in parents.

The problem, Roberts notes, is that we are “in the dark about the future” and worse we are “in the dark about how much darkness” there is. That is, we are ignorant and do not know how ignorant we are. Roberts writes about L.A. Paul’s book Transformative Experience in which the author uses the metaphor of becoming a vampire to analyze big decisions; Paul says it is not possible to imagine what life is like as a vampire before becoming one, and that after becoming a vampire, our likes and dislikes would change. So, do you make a decision based on your current likes and dislikes or future ones? Likewise, we are in the dark about how we will feel about life as a parent or spouse, nor is it easy to prioritize which set of pros and cons to favour in advance of momentous decisions. Roberts discusses Persi Dioconis, a professor who must make a decision about moving from Stanford to Harvard, and while both are prestigious universities, there is a difference between being a Harvard professor and a Stanford professor. All Diaconis knew first-hand was being a Stanford professor while all he could know about being one from Harvard was based on second-hand information and his best guess at what he might feel being a Harvard professor. The problem is that we are not very good at predicting how we will feel (“expected utility” in economics jargon). Rationality is not much help, Roberts notes, “if you don’t know what its like to experience one of the choices you’re facing.”

Wild Problems is like a self-help book for big decisions written by an economist who is trying to expand how economists (and readers) think about wild problems. Roberts offers a few techniques and a large piece of advice. The techniques include flipping a coin on really tough decision; not to make the decision but to gauge the reaction to the outcome as the emotions felt after the coinflip might reveal what is not consciously understood. Understanding that what works for one person might not work for another; we are not all cut out to be parents or move to another country to chase a promotion at work. Eschew transactional approaches to friendship; value friends independent of the pleasures they provide. Get over yourself; decisions become more complex, but that complexity can be met by understanding that one is aware he is not the center of the universe (so learn techniques of self-awareness). Privilege your principles; “do the right thing simply because you think you should” because no calculus cancels out “betraying who you are or who you aspire to be.” Follow rules; “they reduce the time deliberating and trying to measure those pesky, hard-to-measure costs and benefits.” Be like New England Patriots coach Bill Belichick; have humility about what can be known and develop strategies for coping with uncertainty (Belichick trades for more draft picks because he knows that drafting NFL-quality football players out of college is difficult, so quantity is valued for perceived quality).

The big piece of advice is to understand, “human beings care about more than the day-to-day pleasures and pains of daily existence.” In addition to seeking pleasures and avoiding pains, Roberts explains: “We want purpose. We want meaning. We want to belong to something larger than ourselves. We apsire. We want to matter.” These larger – one might say grander — desires transcend easy cost-benefit analysis but “are at the heart of a life well lived.” We should as individuals make choices that enable our flourishing which Roberts defines as “becoming something beautiful and worthy of admiration,” by “taking our circumstances and making the most of them in fulfilling our human potential.” Roberts quotes Adam Smith, founding father of modern economics (and the subject of Roberts’s last book, How Adam Smith Can Change Your Life), who said in the Theory of Moral Sentiments, “man naturally desires, not only to be loved, but to be lovely.” Roberts explains Smith meant “to be lovely” is to be “worthy of praise, appreciation, admiration, and respect.”

Roberts runs throughs various major life decisions to explore how they fit in with human flourishing, and one worth noting is voting. Roberts says that rationally speaking voting does not make any sense because a single vote will not make a difference in any election. Still the majority of people take part in the civic exercise because they believe that the duties of citizenship outweigh the cost of taking the time to go down to the voting booth. In a niggling criticism of Roberts (who makes no pretense of being exhaustive in his considerations of various life decisions), he ignores the fact that many citizens vote because it is a way for them to express their virtues and to recognize humanity’s meaning and purpose by supporting candidates that would optimize human flourishing. The fact that any single vote is highly unlikely to influence the outcome is less important than the story we tell ourselves about our priorities when we vote.

The attributes that most influence this flourishing — “integrity, virtue, purpose, meaning, dignity, and autonomy” — elude easy quantification. Roberts resists the economic way of thinking that would just somehow find a measure of these attributes to make them rationally utilitarian. They are more mysterious than the traditional economic way of thinking can appreciate. Indeed, Roberts concludes observing that wild problems are “not problems to be solved but mysteries to be experienced, tasted, and savored.” Understanding this makes life richer.