Authority and Freedom: A Defense of the Arts

Home/Reviews, Society & Culture/Authority and Freedom: A Defense of the Arts
Previous Next

Authority and Freedom: A Defense of the Arts 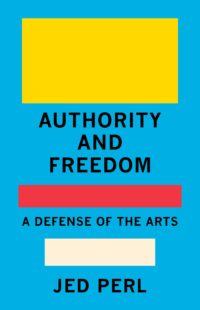 Long-time critic Jed Perl (The New York Review of Books, The New Republic) has slim new volume, Authority and Freedom: A Defense of the Arts that is being described in many reviews as a salvo against relevancy. Perl, say these reviewers, defends art-for -art’s sake. Up to a point that this is true. Roger Scruton says in Culture Counts that art-for-art’s sake ignores the moral importance of art, a mistake that Perl generally avoids as he takes the moral dimension seriously. The value of art, says Perl, is intrinsic. Perl says that too often, “instead of art-as-art, we have art as comrade-in-arms,” that is, art to advance a particular ideology or agenda, whether it is political, identity. or even mere amusement. Perl is near common ground with Scruton (even if they use a different vocabulary) that art is an “imaginative achievement” which is “uncategorizable.” The deliberate political or social ends of art borrows its authority from the goal being pursued; art ought to have the freedom to find truths that speak to the human soul. Art as intrinsic good can be also be an instrumental good, but it must be the former first. The relevance, in other words, must be found in the work of art itself. Acknowledging that art should resonate with its audience, Perl writes: “But what holds together all the disparate elements in any work of art, at least any that endures, are the novelist’s mastery of prose and storytelling, the composer’s or musician’s mastery of harmony and melody, and the painter’s mastery of color and composition. The artistry with which the elements are united is what makes the subject matter really count.”