Biography provides insights into criticism and times of Harold Rosenberg

Biography provides insights into criticism and times of Harold Rosenberg 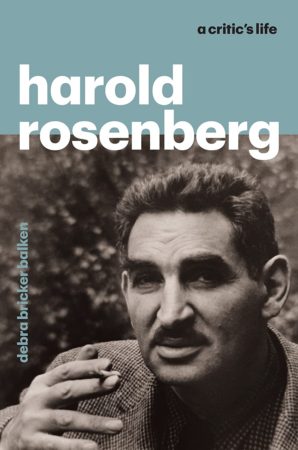 Harold Rosenberg was a public intellectual long before that term was coined, a leading cultural critic in the New York scene in the middle of the 20th century. Debra Bricker Balken has written the first — and long overdue — comprehensive biography of Rosenberg, that doubles as a history of the intellectual scene in New York City from the 1930s through 1970s.

Born in New York City in 1906, Rosenberg attended public school before getting a degree from the Brooklyn Law School in 1921, but an encounter with the lesser-known writer Harry Roskolenko on the steps of the New York Library – an encounter which opens Balken’s biography – enamored Rosenberg of the life of the mind, especially as approached by a Marxian worldview.

Rosenberg was more influenced by his Marxism than his Judaism (although keenly cognizant of the latter) and though he began his career as a poet and critic of poetry, he would soon find his niche as a critic of art and the culture which incubated it. He became a regular contributor to Poetry and Partisan Review, Art Front and ARTNews, and started and quickly closed a pair of journals, before eventually securing the job as art critic for The New Yorker. Many of these publications – or more precisely, the individuals associated with each publication — had public and private spats over events of the day and deep philosophical differences, and the strength of Harold Rosenberg: A Critic’s Life is Balken’s detailed description of those arguments, the “competitive and ideological battles that divided so many writers” in the various publications. In this, we can understand not only Rosenberg’s rivalries and enmities but the political world that saturated the arts from the 1930s through 1960s. (It should be noted that Balken shows little interest in Rosenberg’s job as a program consultant for the Ad Council from the late 1940s until 1973, employment that provided regular income for a person who was otherwise effectively a very famous freelance writer. Likewise, Balken downplays Rosenberg’s personal life – his marriage and infidelities — so we do not come to know the full person but rather, as the subtitle notes, the critic’s life. It is very much an intellectual biography rather than a full picture of the man.)

Rosenberg’s cohort included the writers Hannah Arendt, Saul Bellow, and Mary McCarthy, literary theorist Kenneth Burke, social critic Dwight Macdonald, literary critic and editors William Phillips and Philip Rahv, art critic Clement Greenberg, philosopher Sidney Hook, and artists Franz Kline, Willem de Kooning, and Barnett Newman, among other luminaries of the time, and their public and private battles were legendary; Balken does a good job rehearsing them without litigating who was right and who was wrong, or wronged, although there is a clear sympathy for Rosenberg’s side in many of these fights. At times, however, we learn much more about the inter- and intramural battles at the various publications like Art Front and Artforum than about Rosenberg himself. Fascinating stuff, indeed, but not necessarily a neat fit for a Rosenberg biography. In some ways, one might get a better idea about Rosenberg as a person by reading Bellow’s short story “What Kind of Day Did You Have?” in Him with His Foot in His Mouth and Other Stories, in which Rosenberg is presented as the character Victor Wuply. That said, perhaps we should be thankful that Balken merely reports, “Rosenberg’s observations about the libido stemmed from experience” of three simultaneous affairs and “represented a holdover of bohemian convictions where modern love defied the institution of marriage.” Yet more of this biographical detail does, indeed, seem pertinent to Rosenberg’s commentary, and we are very clearly missing out on this part of the critic’s life.

After World War II, Rosenberg became part of the anti-communist Left and soon established himself as one of the three most important art critics (along with Greenberg and Leo Steinberg – the three famously referred to as the “kings of Cultureburg” by Tom Wolfe), but he may be better known for his contributions to broader cultural commentary. Rosenberg added a number of important phrases to the stock of American ideas including “herd of independent minds” in 1948 (which he used to skewer many of his own friends and allies in the culture industry) and “action painting” in 1953.

In terms of art criticism, Rosenberg’s “action painting” turned the critical eye away from the form of the work in question, viewing art as an intrinsically political act. He would employ the vocabularies of sociology and psychology in his art criticism, while eschewing what he dismissed as the “shop-talk of artists,” relatively unimportant (to him) matters such as colour, light, and space. Greenberg and Hilton Kramer took aim at Rosenberg for (in Kramer’s words) “alienat(ing) the visual realities of painting from the crux of the discussion, leaving the audience free to regard the creation as being little more than the psychological residue of the artist’s personal crisis.” Kramer would charge (in his review of Rosenberg’s 1964 collection The Anxious Object) Rosenberg with seeking to “sustain” the “values” of New York School of the 1950s as epitomized in the work of Willem de Kooning, “always the touchstone of his age.” Balken chalks up Rosenberg’s rejection of formalist criticism to his likely reading of Maurice Merlau-Ponty’s “Marxism and Philosophy” published in Politics in 1948, after which Rosenberg would declare, in Bergen’s formulation, “art can be accessed by ‘anything other than art criticism’.” Reading Rosenberg’s criticism and theorizing leaves little doubt that he attempted to be the gatekeeper for the New York School and his elevation and protection of de Kooning as the preeminent figure in that school of art. (For his part, de Kooning recognized Jackson Pollock as the founding figure on top of the New York School.)

Balken attempts to paint Rosenberg as an outsider, a difficult argument to make considering that he held a series of influential and important government jobs during World War II including as art editor for the American Guide Series produced by the Works Progress Administration, wrote for numerous chic cultural organs, had published seven original books or collections of essays from 1969 through 1978, and held posts and lectured at universities including Princeton and University of Chicago. Bellow painted him as well-connected, including to Wall Street figures, in the disguise of his “fictional” Wuply character. And when Rosenberg died, at the age of 72 in 1978, he was a deeply influential cultural gatekeeper as the art critic of the New Yorker and member of the Committee on Social Thought at the University of Chicago. Whether you believe, as Kramer and Greenberg did, that Rosenberg’s influence was pernicious on the artists and their audiences or celebrate his deemphasis of formalism in art criticism and appreciation, there is no doubting that this critic’s life was one of unmatched influence.