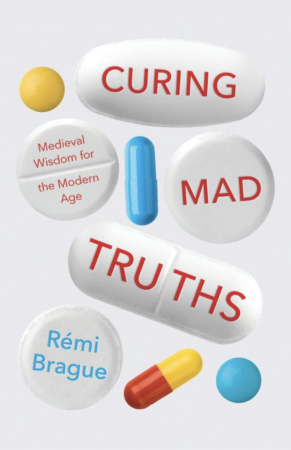 The French Catholic conservative Rémi Brague’s latest English-language book, Curing Mad Truths — based on a series of lectures to English-speaking audiences — examines the fundamental problems with modernity and finds the cure for the errors of modern man’s ways in the Middle Ages. Brague identifies the central error of modernity as the loss of any semblance that humanity is intrinsically valuable. Modernity ignores or misses that intrinsic value because modernism conceives history and human endeavour as a “project” and projects turn human experience – sometimes human being themselves — into experiments. Brague observes, “Whenever the idea of a project plays the lead, the very figure of Truth changes,” because truth is merely a representation of prevailing power structures in the on-going experiment(s) of history. This is a powerful observation. Brague concedes that there have been post-Medieval developments worth preserving (health, peace, and liberty), but insists that a reclamation of Medieval beliefs about man and God must displace the secular understandings that have come to dominate western culture today. A return to the Middle Ages is not a return to the cartoonish vision of the time as the Dark Ages, but a recapturing of the Medieval sense that mankind and the planet he inhabits are created not by chance but by a benevolent God. Mankind must be viewed a part of Creation and thus imbued with meaning and value. There is hope because, as Brague explains, rediscovering and reintegrating virtues (based on the Commandments) must take place in the family, which has been diminished by the forces of the state and market, meaning we all have the power to help turn things around. Curing Mad Truths is not “an easy read,” as it is full of etymologies and the minutiae of Christian theology and Platonic and Aristotelian philosophy (that the Good is not merely something we do but something we are) but those so disposed will benefit richly from Brague’s critique of modernity.