The Deep Places: A Memoir of Illness and Discovery: 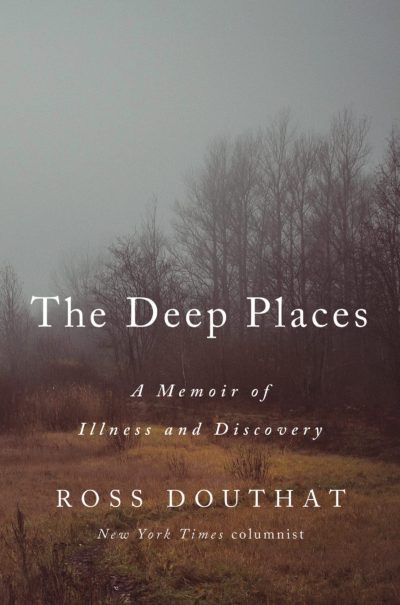 Ross Douthat, the house conservative of the New York Times, is author of six books, the latest being The Deep Places: A Memoir of Illness and Discovery, his harrowing tale of contracting a chronic form of Lyme disease, a bacterial infection acquired from deer-tick bites. Douthat’s doctors were skeptical of his physical pain as many in the medical establishment doubt the existence of a long-lingering form of the disease and told Douthat the condition was psychosomatic. In Douthat’s telling, the physical suffering was a torment almost matched by the sense of paranoia and despair that was a result of his doctors’ – plural — dismissal of his pain and suffering. In 2015, Douthat and his wife and two children moved from Washington to a 1790s farmhouse with three acres in Connecticut near where both of them grew up. After buying, but before moving into their dream house, the nightmare began, with Douthat waking one morning with a stiff neck and swollen lymph node. He would later develop a plethora of ailments including severe pain in his back, chest, legs, and shoulders, and digestive problems. He could not sleep. Numerous doctors dismissed his pain as stress, leading Douthat down the rabbit hole of internet self-diagnosis and treatments from maverick doctors. He tried treating his illness with antibiotic drips, electromagnetic frequencies, and “every non-prescription antimicrobial substance that any study, however obscure, suggested might kill Lyme bacteria.” Despite his many attempts to treat his illness, Douthat still suffers from chronic Lyme disease, a “sick but functional person” (during which he wrote three books and had the couple’s third child).

The book’s title is a reference to the “deep places” far from mainstream medicine that this bona fide member of the intelligentsia searched for, often from people Douthat describes as “cranks and charlatans.” Douthat is a magnificent storyteller and one will be moved by the stories of his writhing in pain in his new home or stumbling into church to pray for relief, but what gives this brief volume its poignancy is Douthat’s reflective forays; The “deep places” are also the philosophical reflections on the meaning of his illness; writing about not only his own but the community of Lyme disease sufferers, he describes that it makes “your body feel like a cage around your consciousness.” And without being preachy, Douthat acknowledges that chronic suffering “can make belief in a providential God … feel essential to your survival.”