Home/Politics, Reviews/Movements need both sound principles and organization
Previous Next 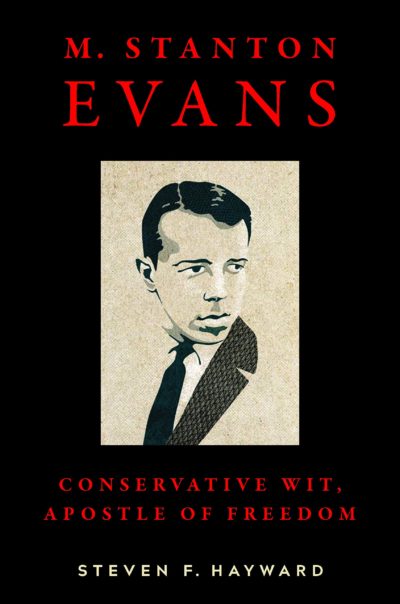 Steven Hayward’s new biography of M. Stanton Evans is overdue; he was a giant in the U.S. conservative movement but he remains criminally under-appreciated. Evans graduated from Yale shortly after William Buckley did and quickly began serving the movement from both inside and outside its formal structures. He became editor of the conservative newspaper Human Events but was also an editor and columnist at the Indianapolis Star. He taught journalism at Troy University in Alabama and through the National Journalism Center (NJR) which he founded in 1977 and ran until 2002. Hayward, who once interned for Evans, says that the NJR “became one of the key components in creating the thriving conservative media ecosystem we have today.” When this reviewer met Evans in 1997 and asked what a conservative journalist was, Evans wryly remarked “one that reports the facts.” Hayward notes that Evans made a distinction between bias and objectivity. “Having a point of view is fine if your reporting is based on an objective and honest account of facts,” Hayward writes, and is not ignoring relevant information to promote an agenda. Most journalists fail that standard, and Evans’ rule is a true for columnists as reporters.

Hayward had to chose to either focus on Evans’ ideas or his actions and chose the former. Evans was present at the creation of the first mass conservative youth organization, Young Americans for Freedom (YAF), and wrote its founding manifesto. He founded the American Conservative Union (ACU), which rated congressman on their votes and organized grassroots conservatives in elections. He started the Conservative Political Action Conference, the largest annual gathering of conservatives in the U.S. which continues to this day and just last month held its first Hungarian conference. He took part in Republican Party conventions. It is no exaggeration to say were it not for Evans’ YAF and ACU, Ronald Reagan’s strong stand in the 1976 North Carolina presidential primary would not have occurred and he likely would not have been in a position to become president four years later. Evans chose to work outside the administration believing it was important to hold Reagan to account to keep him from betraying his conservative principles.

Hayward does not ignore Evans’ ideas. Evans was a close friend of Bill Buckley’s and wrote the famous Sharon Statement at a gathering of conservatives at Buckley’s home in Sharon, Connecticut in 1960. In 12 brief paragraphs, many of them a mere sentence, he outlined what unified much of the conservative movement, in what Frank Meyer became most closely identified with – fusionism, the marriage of libertarianism (liberty) and conservatism (tradition). The success of that project has been so great that we take for granted that these two traditions marry easily and naturally and go by the name conservatism today; it was not always so and Evans, both intellectually and entrepreneurially, is a major reason why.

What is being lost today within conservatism is what Evans recognized, the importance of the transcendent. Evans found the roots of both liberty and order in Scripture and early Christendom rather than ancient Greece or the Enlightenment. And, like Meyers, Evans did not suggest that freedom and tradition easily co-existed but rather lived in tension. The work of practical politics was to make that tension work.

Hayward shows that Evans was a happy warrior and his jokes and jabs alone make reading this biography worth it. Evans’ example of principle and organization, as well as his winsomeness, are worth emulating.