Free Speech: A History from Socrates to Social Media

Home/Reviews/Free Speech: A History from Socrates to Social Media
Previous Next

Free Speech: A History from Socrates to Social Media 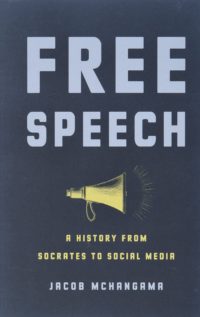 Jacob Mchangama’s massive but readable and spirited defense of Free Speech is a must-read for anyone interested in this important and increasingly contentious topic. Mcchangama notes that free speech’s origins go back further than the U.S. First Amendment or the Enlightenment. Rather, they have roots in antiquity. Pericles, he notes, extolled the virtues of open debate and tolerance of dissent as far back as 431 B.C. Mcchangama finds that there is a long history from ancient Greece to the 10th century Abbasid Caliphate to 18th century northern Europe of fighting for and protecting free speech as a necessary component in any healthy socio-political ecosystem. He noted that irreverent thinkers such as Ibn al-Rawandi questioned Islamic prophecy and holy books in the 900s A.D., and the Dutch Renaissance scholar Dirck Coornhert’s 1582 pamphlet against capital punishment for heretics insisted that it was “tyrannical” to ban “good books” (suggesting a limiting principle that censorship has a place, it could be argued). Before the American revolution, Sweden become the first jurisdiction to protect freedom of the press in 1766 and four years later, Denmark banned censorship. Yet, Mchangama argues, there is no straight line of progress of free speech as it seems almost inevitable that the powers-that-be eventually determine that freedom of speech has gone too far and must be restricted or outright squelched. Irreverent criticism is followed by blasphemy laws; Coornhert’s writings were banned by Dutch authorities; Sweden’s monarchy took back control of printing presses.

The history is fascinating. Mchangama’s diagnosis of the situation today is decidedly mixed. He finds authoritarians everywhere attacking freedom of the press and academic freedom. Yet he understands that freedom of speech is not the same as freedom of reach: we do not have a right to be heard. He is strongest in condemning cancel culture but more important he is right in identifying the cause of the modern malady: we have “internalized the idea that the values of free speech and equal dignity are sometimes mutually exclusive rather than mutually reinforcing.” He finds deeply rooted psychological reasons (drive to please others, fear of the other, desire to avoid conflict, norms of civil behavior) that “pull us in the direction of wanting to silence uncomfortable speakers.” But, says Mchangama, we must resist the (ironic) urge to fight what are often considered oppressive ideas with oppressive power. The dangers are that much starker when institutions such as the media and universities that function best with free speech, become arbiters of dangerous or harmful ideas.