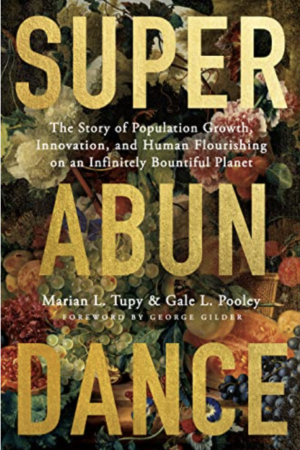 Worries about “overpopulation” are always followed by demands for population control to prevent the growing mass of people from stripping the planet bare. The problem with that line of thinking according to Marian Tupy of the Cato Institute and Gale Pooley of the Discovery Institute, authors of the new book Superabundance: The Story of Population Growth, Innovation and Human Flourishing on an Infinitely Bountiful Planet, is that people have not just mouths to feed but brains to think. Echoing the late Julian Simon, Tupy and Pooley argue that people are the ultimate resource because mankind is an innovating species, so problems are solved when there are more potential problem-solvers. The authors approvingly quote George Gilder who said “knowledge is wealth.”

Tupy and Pooley expand on Simon’s famous analysis that the most important input to the exploitation of the planet’s resources is ideas and his bet with population doomsayer Paul Ehrlich, in which Simon predicted that a basket of commodities would go down in price in the 1980s indicating that human ingenuity would make the resources cheaper on global markets. Ehrlich predicted a demand-based strain on commodities would lead to price increases. Not only did the basket of commodities decrease over the decade, all five commodities declined in price, and Simon won the bet.

Tupy and Pooley look at a larger range of goods over a longer period of time (for some products going back nearly two centuries), in 40 countries, and found that more people are consuming more goods and that real prices are falling (really!) over time when measured by how much labour is required at average wages to buy a particular good over time (“time-prices”).

The authors have determined that a basket of 50 commodities from tea to uranium has fallen by 72 per cent since 1980 when measured this way. The time-price for manufactured goods has fallen even quicker (it took a typical worker 828 hours to buy a flat-screen television in 1997 but just 4.6 hours in 2019). Tupy and Pooley’s novel approach also allows economists, historians, and social scientists to measure progress in different locations over time, and there is much good news to be found. While the gap in time that a typical Indian and American family worked to purchase rice has grown slightly between 1960 and 2018, both have to work dramatically less to put food on the table. In 1960, the Indian family had to work for seven hours to put rice on the table, while the American family needed one hour; in 2018, the respective figures were 58 minutes and 7.5 minutes. Yes, the Indian family worked 7.7 times longer to feed the household as American families did in 2019, compared to seven times longer seven decades earlier, but the Indian family also saves nearly six hours of wages for something other than buying rice.

This is great news, but it has become a fact of life on planet Earth so it does not produce headlines about the progress made over the past two hundred years, and more dramatically in recent decades, in decreasing poverty and improving the lives of the middle class. The authors note, “When basic things get more abundant, it’s the poor who benefit the most.”

If the authors stopped there, Superabundance would be a remarkable work of scholarship, but they also model how time-prices correspond with population growth and they found that for every one per cent increase in population, there was about a one per cent decrease in time-price. In other words, they’ve proven that population growth is good for mankind; they’ve disproven the erroneous thinking of two or three generations of policymakers that viewed a growing population as a problem to be solved rather than a source of human flourishing.