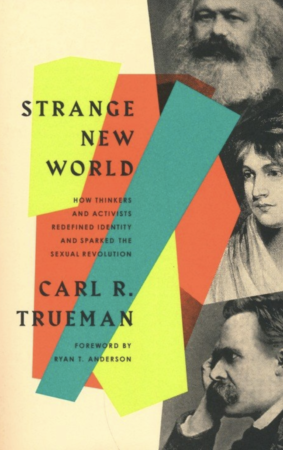 In The Rise and Triumph of the Modern Self (reviewed in these pages in July 2021), Carl R. Trueman, a professor of Biblical and religious studies at Grove City College, examined the philosophical roots of our decadent culture. In Strange New World: How Thinkers and Activists Redefined Identity and Sparked the Sexual Revolution Trueman provides a shorter, more accessible examination of the European intellectuals (Jean-Jacques Rousseau, René Descartes, Karl Marx, G.W.F. Hegel, Friedrich Nietzsche, Simon de Beauvoir, Sigmund Freud, Herbert Marcuse, and Wilhelm Reich) who have replaced religiously and community rooted man with a secular expressive individualism (or in the case of Marx, collectivism), which, in turn, and unleashed the Sexual Revolution by impoverishing our moral imagination. These creators of “the modern self” freed man from reason and tradition by locating emotion as the guide to proper living. Controlling one’s desires was an infringement on our own freedoms and thus discouraged. Trueman notes what the French Romantics started, the Germans concluded by imagining the end of history (Hegel) and beginning of class consciousness (Marx). Marx’s influence was especially pernicious, Trueman argues, by subverting all human relation to economic relationships and subsuming the personal into the political. Marx and Nietzsche shattered the religious veneer of society and in doing so stripped mankind of all constraints. Stir in some Freud who placed unbridled sex at the centre of man’s happiness, and we have the recipe for a culture unmoored to anything but our most immediate desires. Personal desires, Trueman notes, are no substitute for a common morality, and mankind is the poorer for it.