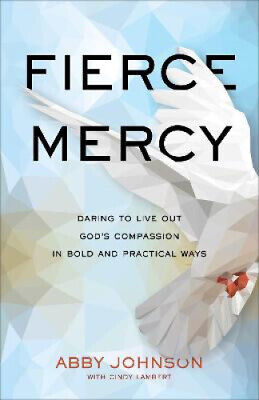 The work at an abortion facility is emotionally draining. Tasks, even the most minute ones — walking women from their cars, scheduling the fatal procedure, or witnessing first-hand the carnage after the abortion — tack on, even subconsciously, significant spiritual and emotional tolls for those carrying them out. Shocked by the horrors of their industry, abortion mill employees who “walk away” feel ashamed and guilty of their past work, believing that they are unworthy of mercy and redemption. In her latest book, Fierce Mercy, Abby Johnson shows this mentality to be untrue. Leveraging relatability through the use of her own life story and experiences as a public pro-life activist, Johnson shows how God’s unbounded mercy is at work in the smallest, yet most mysterious ways, for all people, no matter what they may have done in the past.

Post-abortive and a former Planned Parenthood facility manager, the virtue of mercy strikes a personal chord with Johnson. Deeply wounded by the brutalities of abortion in both a professional and personal manner, the now mom-to-eight explains grappling with feelings of unworthiness and disgrace when leaving the side of “choice.” However, as Johnson deepened her relationship with God, she came to understand that mercy “is God’s love in action. It is not simply a feeling. It is an attribute of God – one that we can reflect and emulate.”

Within five months of Unplanned’s release (the story in which Johnson discusses her experiences as a manager at the Bryan Planned Parenthood facility in Texas), she, along with her husband Doug, had helped 17 workers leave the abortion industry. This new idea of redemptive mercy firmly cemented, coupled with tangible proof of God at work, propelled Johnson to found And Then There Were None (ATTWN). This ministry is dedicated to helping abortion workers leave the industry by finding them job alternatives and healing.

Johnson, a Catholic convert, argues that as children of God “we are precious to Him, and He wants to use us to reach out in His mercy toward others.” In serving those who are wounded, especially in the particular capacity of working at an abortion facility, this mercy is put into tangible action. ATTWN’s mission may be difficult to reconcile for some pro-lifers, who have identified abortion workers as murderers, moral monsters who see the products of their killing and continue anyway. Johnson admonishes such attenuated conceptions because “mercy comes from Christ — and hate comes from hell.”

Johnson references the Adrienne Moton case as a prime example of God’s infinite mercy. Moton was a family friend of Kermit Gosnell, who worked as a long-time employee in his West Philadelphia abortion facility. Johnson had been following the Gosnell case, with interest, ever since his arrest and had been praying for his staff. When she received a call from Moton through the ATTWN hotline asking for help, Johnson knew that God was at work. Moton and Johnson are now good friends, as they help one another on the path of healing and mercy.

Having been struck with God’s “fierce mercy,” Johnson’s raison d’etre has evolved to dismantling the abortion business, one worker at a time.

Johnson’s familial relationships also blossomed when she welcomed God’s compassion in her life. While working at Planned Parenthood, Johnson revealed that she had a hard time connecting with her daughter Grace. She admitted to being far too distracted with other things, among which was her devotion and utter investment in “workaholism.” This has changed since her rise to prominence in the pro-life movement. Now Johnson has opened her heart to life, allowing God to bless her and her husband with more children, including through the adoption of her son Jude.

Mercy, in its profundity, is a tough concept to grasp. Nevertheless, Johnson stresses the importance of knowing that everyone is in need of it, no matter how “unworthy” they may seem. Johnson, now a well-established, public pro-lifer, is a testament to this divinely “fierce mercy”. Without coming into the knowledge of God’s immense love, she would have never become the intrepid life activist she is, a pro-life powerhouse who has changed the hearts and minds of countless across the globe.

Angelica Vecchiato is an Interim reporter.