The Library: A Fragile History

The Library: A Fragile History 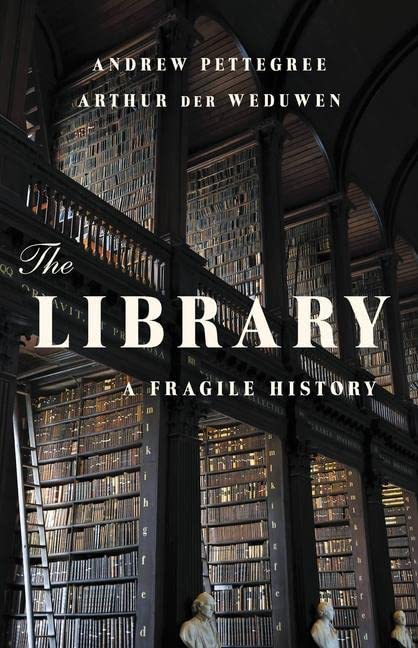 Andrew Pettegree and Arthur der Weduwen, a pair of Scottish historians, attempt – and succeed – to provide a history of the library from ancient times to today, and explain its importance. Ultimately, libraries are important because books are important, with Pettegree and der Weduwen concluding “the sheer tangibility of the book is a key element of its success, and its versatility: as manual, totem, encyclopedia, and source of entertainment. And the library, as location and concept, has shared this mutability.” The authors begin with manuscripts from papyrus scrolls and animal skins to the advent of paper and bookshelves. Before the printing press – which shockingly, was slow to spread to other cultures — libraries were reserved as storehouses of laboriously produced manuscripts for the wealthy. They were prestigious for its owners. After the printing press and “mass” production of books, libraries became symbols of national rather than personal power. Books produced in the vernacular were criticized by some religious leaders who worried about the great unwashed forming their own opinions. It is a recurring tragedy in the West that monastic and other religious libraries were routinely dispersed, pulped or burned, from Charles V’s destruction of Lutheran books in the Netherlands to the French Revolution’s destruction of Catholic collections (“the most destructive purge of libraries” until World War II). There are fascinating vignettes of Nazi soldiers taking flamethrowers to stacks in Warsaw and after the War, the removal of large numbers of German books and manuscripts as reparations to the Soviet Union. The authors also look at the curation of libraries – choosing what is and is not collected by librarians. Sir Thomas Bodley, founder of Oxford’s highly esteemed library in the early 1600s, did not consider novels and plays suitable material for an institutional library such as Oxford’s and it did not acquire any of Shakespeare’s plays until 1623.

This is a great volume for bibliophiles although there will be consternation with the story, which is not one of steady or even intermittent progress. As the authors note, there is a “repeating cycle of creation and dispersal, decay and reconstruction.” Volumes have been lost to worms, weather, and war, among other calamities. This is not the story of public libraries – making available for “free” entertainment and information to the general public – but rather the history of “constant curation” of which ideas deserve at chance at posterity, with the difficult decisions forced by both financial and space considerations, not to mention personal prejudices. Many great collections were eventually lost, either sold off or destroyed. The Library belongs on the shelf of any serious booklover.