The Quiet Before: On the Unexpected Origins of Radical Ideas

Home/Reviews/The Quiet Before: On the Unexpected Origins of Radical Ideas
Previous Next

The Quiet Before: On the Unexpected Origins of Radical Ideas

The Quiet Before: On the Unexpected Origins of Radical Ideas
Gal Beckerman (Crown, $39, 331 pages): 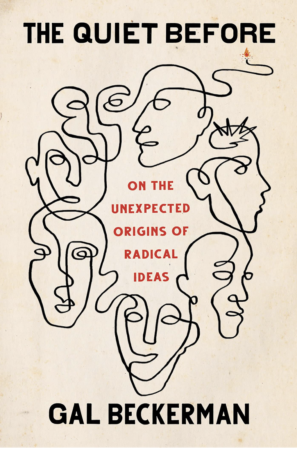 Gal Beckerman’s The Quiet Before examines how radical ideas are born, stir, rise, and eventually influence the general public. Beckerman argues that for ideas to grow in popularity, they must be sustained by a small group of committed believers who share them through smaller circulation media such as pamphlets, speeches, conversations, and small-circulation publications, where they are refined and find adherents before making their way to the attention of a broader public in mass publication daily papers or the speeches of mainstream politicians. Interestingly, Beckerman argues that the internet is not an ideal venue to the development of radical ideas because of the very nature of online existence: loud, performative, self-indulgent, and fast-paced. Ideas are originally deliberated in a “whisper” according to Beckerman — hence “The Quiet Before.” The noisy clamour of social media is hardly the ideal setting for deliberation. Twitter, Facebook and online discussion groups cannot “incubate” new ideas. The first few chapters look at the incubation of several radical ideas (the development of a way of measuring longitude, Italian Futurist movement, Russian samizdata newsletters) and there is quite a mixed record of success and failure in his examples. The real lesson (lost on Beckerman) is that deliberating and distributing ideas is hardly a guarantee of success. Fast-forward to today and the world of instant self-gratification through online experiences which Beckerman says is at odds with developing radical new ideas. This seems to be painting with too brod a brush because along with the possibility of self-indulgence on such platforms is constant and instant feedback, through which deliberation can take place. “For all the power social media has lent to movements,” says Beckerman, “it has also stunted them.” The same could be said of many of his romanticized examples. History if full of dissident published manifestos that went nowhere. Beckerman is correct in one assessment of online activism however: “The hard work of hammering out ideology and organizational structure, the building of a strong identity and the setting of goals, all of it can be leaped over, creating movements with all the depth and solidity of a raised-fist emoji.” Genuine activism requires work harder than liking a meme online or participating in an online debate.