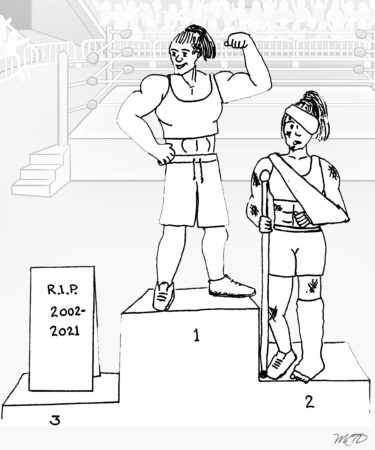 Twenty years is not a long time. In the United States, it is a period that could see as few as three presidents. Shorter than the term of most mortgages, a pair of decades is certainly not a timeframe in which one should expect, in healthy societies, radical changes to fundamental categories and definitions. And yet imagine the shock that someone describing our world would give to a listener in April of 2001. The surprise at superficial details like masks and smartphones would surely pale in comparison to the drastic metaphysical redefinitions that Western societies have embraced. In less than a quarter century, completely new understandings of marriage, and now of the human person, have supplanted age-old and immemorial ones.

Satan, in the garden, deceived Adam and Eve with the same aspiration which was the cause of his own fall: the temptation “to become like God” (Gen 3:5). The allure of this idea is obvious: to throw off all restraints and become the ultimate law-giver, the truth-definer, the very author of reality. But attaining Divine Freedom in the absence of Divine Wisdom, Goodness, and Power is no kind of emancipation. Adam and Eve’s transgression did not lead to liberation, but slavery to the cruel and iron laws of selfishness and sin. In losing contact with the truth, they were immediately subordinated to lies of their own making.

We do not create ourselves; we do not define what we are, nor do we determine our own nature. We experience our existence, from moment to moment, as a free and independent gift. Although we grow and change and improve, and the ongoing process of shaping our moral character is the great project of our lives, life itself is a passive miracle, uncoerced and undeserved. We cannot even “make one hair white or black” (Mt 5:36).

This deep truth has been obscured by the phenomenon of the transgender movement, and a new political and cultural regime that imposes the task of self-definition on those least able to understand the painful paradox of this obligation: the young, the anxious, and the distressed. The vulnerable are now being bombarded by propaganda by which they are encouraged to become their own creators; doing so, they are told, is the solution to their every problem, the final answer to every painful question. This, of course, is a lie, for no one really possesses the peace which these people are being promised.

Indeed, personal identity always has the form of an enigma which unfolds—before us and within us—in unexpected ways. As Pascal put it: “man infinitely transcends man.” And yet, exploitative activists have turned the great mysteries of our selves and souls into a battlefield. Identity has become the Archimedean fulcrum from which point the world as we know it is being overturned.

Thus, the natural processes of maturation are being confused and distorted with ideological language, pharmacological manipulation, and, in many cases, surgical mutilation. Once-fixed categories now bend and blur because, we are told, identity is fluid, self-made, and sacrosanct. And, in the constant conflicts between personal identity and public institutions which seem to erupt every day, every consensus about the nature of the human person is being undone and dismantled, piece by piece.

This implacable movement, this transgender ideology, represents not the triumph of self-definition but rather the collapse of secularism and the vital separations which it has established in the West. With each new victory of this movement—from pronoun designations to athletic competitions—the distinction between reality and faith continues to disintegrate. Personal convictions are now being imposed on society with raw, political force. Private beliefs now require public recognition; certain words and former names are not just injurious but blasphemous. We are entering into a theocracy of identity: the fundamental categories of biology have been replaced by the tenets of a new and tendentious form of faith.

G.K. Chesterton famously said: “When you break the big laws, you do not get freedom, you do not even get anarchy. You get the small laws.” The present moment proves him right. Witness the ever-changing speech codes, policies, and memoranda that seem to be drawn from the imagination of a Wodehouse or DeVries, but which are enforced as they would be in the worlds of a Huxley or an Orwell. Although the encroaching etiquette of preemptively identified pronouns once felt like a farce, it has become a fragment from a large-scale tragedy, in which the doomed protagonist is truth itself.

These are the laws—arbitrary, irrational, and ever-changing—that we have erected in place of the Ten Commandments. The Decalogue: a modest list of obvious obligations and restraints; a document that wins the assent of all the great monotheistic faiths; a clear program laying the groundwork for peace, happiness, and human flourishing; a code of conduct that is imposed by no other authority than the invincible force of the Truth. This is the wisdom we have willfully abjured, the wise, reasonable restraints we have foolishly forsaken.

We can morn for the victims of the transgender ideology, and we can morn the ongoing vandalism perpetrated in its names. We cannot, however, despair. Just as no reality grounds the claims of the ideology of mutable identity, nothing prevents our culture from coming to its senses, of trading the transient, ever-changing truths of this cruel, secular faith for the solid and liberating realities of the human person. Untethered from the truth, every legal, moral, or intellectual system becomes increasingly capricious and absurd. We trust that our fellow Canadians will eventually recognize their folly. And we pray, in the meantime, for all of the victims who are being deceived and oppressed by the theocratic tyranny of identity.