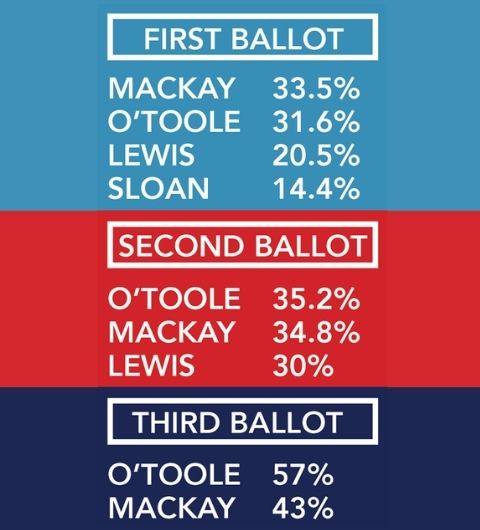 The leadership race for the Canadian Conservative Party was formally called in February and suspended from March 26 to April 29, and the original June 27 date for the election was postponed until August 23. Nearly 270,000 Canadians were signed up as members to vote in the leadership and nearly 175,000 ballots were cast, both records for a Canadian political party. Based on data from their recruitment drive’s email blasts, live telephone calling, direct mail, and newsletter appeals, Campaign Life Coalition said it had signed up more than 26,000 members for the CPC, more than twice the number they signed up in the 2017 race, when 11,000 CLC supporters became Tory members. The pro-life and pro-family membership of the party helped the two unabashed pro-lifers to a strong combined showing and helped determine the ultimate outcome of the race.

MacKay, a former leader of the Progressive Conservative Party and cabinet minister during Stephen Harper’s nine years in power, criticized Andrew Scheer’s performance in the 2019 election, saying that failing to defeat Justin Trudeau was like missing on an empty net and he blamed Scheer’s erstwhile pro-life and pro-family views for the Tories’ defeat. Scheer vowed not to reopen those issues, but MacKay said that having held such views in the past, the Liberals easily attacked Conservatives for them, and MacKay famously called social conservatism the “stinking albatross” around the neck of the Conservative Party.

Those social conservatives were decisive in preventing MacKay from winning the leadership.

The Conservatives give every member a vote to rank their choices amongst the candidates, and each riding is worth 100 points which are divvied up amongst the candidates based on the percentage of votes they get in each riding. On the first ballot, MacKay won a third of the points (33.53 per cent), followed closely by O’Toole (31.6 per cent), with Lewis (20.49) and Sloan (14.39) behind.

The combined Sloan and Lewis vote (34.9 per cent) was more than twice as much as the two Campaign Life Coalition candidates in 2017 (15.7 per cent), indicating that at least a third of the CPC base is pro-life and/or socially conservative. It also speaks to the organizational capabilities of pro-life groups like CLC, Parents as First Educators, and REAL Women. CLC and REAL Women endorsed Sloan and Lewis while PAFE endorsed only Sloan.

Sloan received at least 10 per cent of the points in every province but two: Nova Scotia, MacKay’s home province, and Newfoundland and Labrador. He had at least 18 per cent in each of Alberta, Manitoba, and Saskatchewan, and 17.1 per cent in Ontario, and 14.7 per cent in British Columbia.

The combined vote of Lewis and Sloan was a plurality in every province west of Quebec, including Ontario and British Columbia.

After the first ballot, the last place candidate is dropped and voters’ second choice (if any) is re-apportioned. This process is continued until there is a winner.

Nearly two-thirds of Sloan voters put Lewis second, effectively making it a three-way race. O’Toole (35.3 per cent) leapt ahead of MacKay (34.8), with Lewis gaining significant ground finishing with 30 per cent. In fact, Lewis had more votes than either O’Toole or MacKay because 17,229 of Sloan’s voters switched to Lewis on the second ballot.

This was Lewis’s time to shine. She finished first in each of the four western provinces and finished a close second to MacKay in Ontario. If eight in ten Sloan voters had backed Lewis instead of a mere 63 per cent, Lewis would have finished second and knocked MacKay out of the race.

On the third ballot, the vast majority of Lewis voters supported O’Toole over MacKay, propelling O’Toole to a sizable victory, 57 per cent to 43 per cent. Nearly 34,000 of Lewis’ 60,360 second-ballot voters voted for O’Toole down-ballot compared to just over 9,000 who voted MacKay. More than 17,000 people who had supported Lewis did not vote for either O’Toole or MacKay.

Throughout the campaign, O’Toole and MacKay reached out to Lewis and her supporters, hoping to win down-ballot support. O’Toole did the more convincing job by promising free votes for MPs and supporting conscience rights for health care workers. It was not enough to win the backing of Campaign Life Coalition, but some pro-life groups put O’Toole ahead of MacKay while CLC urged its supporters to refrain from voting for a third choice. Both made their impact felt. The 12 per cent of the party who voted on first ballot who did not back either O’Toole or MacKay have sent a signal that they will not give their vote away cheaply.

There were rumours of deals between Lewis and O’Toole, and Lewis and MacKay, but many of O’Toole’s backers reached out directly to Lewis voters to urge them to support their candidate on the ballot ahead of MacKay. O’Toole also supported Sloan when he got into hot water over comments about the federal public health official Dr. Theresa Tam that some people claimed were racist; the Conservative caucus voted to censure him, but O’Toole voted to support Sloan.

While O’Toole is not pro-life and is a vocal supporter of LGBTQ+ rights, he was less objectionable to many socially conservative voters, especially those who do not care about gay or transgender issues, than was MacKay, and many probably voted for O’Toole to prevent MacKay from winning the leadership.

Former Liberal strategist Rob Silver has noted that the right-of-center has won both previous leadership races with Stephen Harper and Andrew Scheer with about 60 per cent of the vote or more. Another way to read that is that candidates who are the least objectionable to the large base of socially conservative voters win. Indeed, a month before the leadership count, The Hill Times reported that if MacKay didn’t win, it was because he offended social conservative voters who would have been strongly motivated to stop his apparent coronation.

Pundits generally agreed that the “story of the campaign” was the surprising (to them) showing of Lewis. Kory Teneycke, a long-time Conservative operator-turned-talking-head, was among the many both inside the party and out that said Lewis has a bright future in the party, especially because she held “nuanced” views on life and family that do not scare urban and suburban voters.

Lewis offered a four-point plan on life issues including conscience rights, funding crisis pregnancy centres, an end to sex-selective abortion, and rescinding Prime Minister Justin Trudeau’s foreign aid pledge of $7.1 billion over the next decade for “sexual and reproductive health,” which includes funding and agitating for abortion and contraception access in the developing world. Sloan offered his comprehensive 12-point program that included informed consent, rescinding Trudeau’s foreign funding of abortion, conscience rights, and enacting laws to prevent sex-selective abortion and a born-alive infant protection act. He was also more outspoken on the transgender agenda although both he and Lewis opposed Bill C-8 which would have codified new rights for individuals who identify as transgender. Both also spoke about parental rights throughout the campaign.