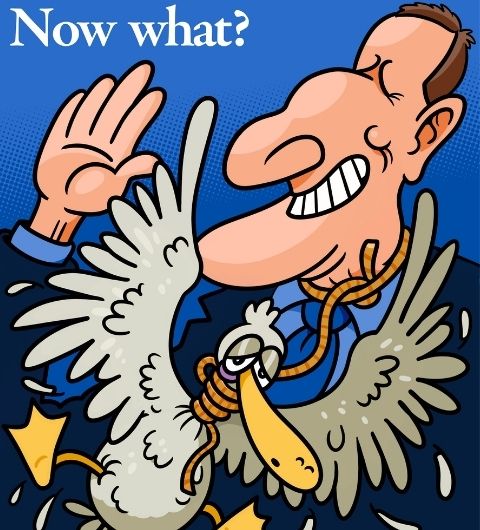 After what seemed like an eternity – both the seven-month campaign and the six-hour wait for the results to be announced on August 23 – the outcome of the Conservative leadership campaign should not have been a surprise, even if some of us were. The “natural” strengths of Peter MacKay never materialized as he did not win Quebec as expected, his victories in the Maritimes not as large as were predicted, and Ontario Tories ultimately found Erin O’Toole more compelling. There was also a strong stop-MacKay sentiment within the party. And a significant portion of that stop-MacKay sentiment came from pro-lifers and other social conservatives within the party determined to prevent the last leader of the now-defunct Progressive Conservative Party of Canada from leading the Conservative Party of Canada he helped found with then Canadian Alliance leader Stephen Harper. MacKay, who has long been considered socially liberal even by the standards of the Red Tory elite in the party, blamed Andrew Scheer’s barely detectable social conservatism for the party’s defeat in 2019, calling pro-life and pro-family Conservatives a “stinking albatross” around the neck of the party.

It is telling that MacKay highlighted the support of his socially conservative MPs and senators while running for the leadership and his flip-flop on allowing cabinet ministers to join backbench MPs in voting their conscience if he ever formed government. MacKay knew he needed social conservatives, if not to vote for him, at least not to oppose his leadership, dulling whatever down-ballot support they may deign to give his primary opponent Erin O’Toole. O’Toole has a track record as MP and despite a few good votes, it has more red marks than green checks and groups like Campaign Life Coalition urged the more than 26,000 members they signed up for the party (out of 270,000 in total) to vote only for pro-lifers, MP Derek

Pundits were unanimous in noting that Lewis did better than anyone expected, and the viscerally anti pro-life CBC host Rosie Barton reluctantly admitted that Sloan did better than anyone at the state broadcaster assumed. Pro-life candidates usually do exceed expectations. The reason is simple. Pundits, panelists, and pollsters do not understand the base of the Conservative Party. Many people who support the party want to conserve – or is it now restore – moral sanity and traditional values. They want politicians who will unabashedly speak up for their values. Few pointy-headed Conservative strategists and advisors understand their own party; they are busy mingling with the fashionable downtown crowds in Toronto, Ottawa, Montreal, and, increasingly, Calgary, but seldom rub elbows with many rank-and-file Tories who do not think the most important thing a Conservative can do for this country is march in a Pride parade.

In 2017, the down-ballot support of Brad Trost and Pierre Lemieux helped put Andrew Scheer over the top (Trost finished fourth) to beat Maxime Bernier and become leader. Scheer ran promising not to reopen the abortion or marriage issues, and immediately proceeded to double-down, disappointing hundreds of thousands of Canadian pro-life and pro-family voters. Many of them stayed home last Oct. 21. It would be a mistake, a missed opportunity, for O’Toole to repeat Scheer’s strategy of throwing social conservatives under the bus. Canadians are looking for an alternative to the Trudeau Liberals, not only because of their profligate spending and tawdry corruption, but because Justin Trudeau has proven himself time and again to be the most pro-abortion prime minister in this country’s history, willing to export abortion overseas, discriminate against those who hold pro-life views, and exploit abortion for political advantage.

We submit that the Liberals can only exploit the abortion issue when the Conservatives treat abortion like a hot potato. Clearly articulating positions that uphold life and promote the flourishing of families – or at the very least, allowing MPs and candidates to do so without fear of reprisal from the leader and his staff – would go a long way to offering Canadians a real alternative to the Trudeau Liberals. It would also demonstrate respect for the party’s base.

After every hard-fought leadership campaign, all the camps talk about party unity. A united party does not merely tolerate pro-lifers; it allows them to fully participate in the life of the party, from selecting candidates to proposing and voting on policy at national conventions.

If Erin O’Toole, who ran as the candidate who would make all conservative feel welcome within the party, wants to win more than leadership contest, he will ensure that his socially conservative base is good for more than leadership votes. He should not presume support of an army of volunteers, donors, and advocates if we are not respected between now and the next federal election day.

The difficult situation for conservatives in Canada Gallery

The difficult situation for conservatives in Canada