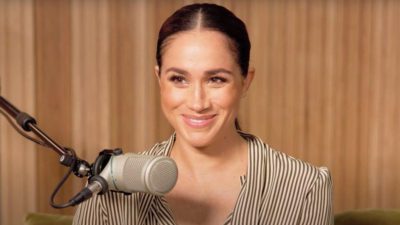 American-born British royal Meghan Markle’s new podcast Archetypes has been living up to its edgy name, comprehensively challenging the status quo and fighting pervasive feminine gender norms, all the while rippling sound-byte waves across the vast ocean of mainstream media. Relatively popular, Archetypes remained number one on the Spotify charts for two weeks after its release date, displacing the controversial yet popular podcast, The Joe Rogan Experience. According to Markle, the voice of the podcast who also doubles as its executive director, the weekly show is for those longing to “get to know the real Meghan.” As the (former) Duchess of Sussex laughs and ruefully sighs with elegance befitting a royal, an unassuming, pro populo feminism is delicately put forward for the realization of the talkshow’s secondary purpose, to “dissect, explore and subvert the labels that try to hold women back.”

Three of the first episodes have seen Markle talk with feminist “icons” Serena Williams, Mariah Carey, and, most recently, Mindy Kaling. On the podcast, the Suits actor is given free rein to vaunt her avant-garde feminist ideologies — and to enkindle the same ideological flames in others. In her latest episode, she opened the discussion with an assignment she completed as a 14-year-old student at Immaculate Heart, her devoutly feminist, Catholic all-girls school in Los Angeles., wherein she had to plan her future wedding. The assignment irked the would-be duchess because why on earth should young, impressionable girls be planning their wedding? In sync with her fully feminist flair, Markle argues that they should be mapping out their careers instead as perfectly happy single women. The entirety of the episode focused on marriage, family, and singleness. Marriage as a necessity or as part of the “life plan,” plays into an outdated gendered norm that is in desperate need of “refreshment” according to Markle. In our present-day, marriage – from a political and cultural standpoint – is being pushed on women, and as a result, Markle contends that the concept of “choosing to be single” should be reinforced as acceptable and become more prominent among young ladies of eligible age. Markle comments with some sorry condescension, “The message, even at my feminist all-girls school, was as traditional as it gets: first comes love, then comes marriage.”

This sequence of events was far too much for New York Magazine writer Rebecca Traister, who took to the podcast openly criticising marriage in its “traditional” form as the clincher in organising “power and responsibility and labour along gender lines” so that “women became dependent on men” because “men were earners outside the home.” The “traditional hetero” marriage comes with many outlets for oppression as it organizes “sexual power and social power,” evidenced manifoldly when a woman changes her maiden name to that of her husband. Although modern society has made a pass at making marriage a more “equitable institution,” Traister avows that the entrenched power structures nonetheless “persist because they’re really powerful.” Afterall, if the tyrannical marriage establishment “was centuries in the building, it’s centuries in the dismantling.”

The rhetoric used throughout the podcast is heavily loaded. Modern-day feminists, who find an outlet through the Archetypes podcast, see marriage as something oppressive and instead glamorize the single, career-girl lifestyle. A voice in the wilderness must call out: what’s so wrong with wanting to get married? Is the career life as good as they say it is? Rationally minded, non-feminist women can attest to the fact that not every man is tyrannical, nor is every marriage repressive. Proven biologically and throughout human history, women can find genuine happiness in male companionship and relationships. With the socio-cultural perception of marriage tainted so negatively, it isn’t hard to imagine why so many women, and young people in general, are now conscientiously deciding to stay single.

Canadian academic Jordan Peterson, the highly successful professor and world-renowned public speaker, links society’s all-encompassing emphasis on professional work and power to an inhuman dilemma, for women – and even for most men. The former University of Toronto professor makes reference to his professional experience that high calibre women “decide in their 30s that relationship and family are the most important things in their life,” something they find difficult to reconcile with their fast-paced, high-energy working life. Psychologically speaking, the older you get, the more important your family is for you, which is why major law firms “have a really difficult time holding on to their high-performing women.” At the end of the day, it is a truth objectively known that there aren’t going to be any human beings without a family, so if, as a society, we are not able to value that ideal, everything else will fall apart.

So maybe it’s not as complicated as we think, or not as feminsit or oppressive as Markle would like us to believe. Maybe just maybe we should consider that it’s based on some sort of truth: some women really do fall in love, get married, and they live happily ever after. And they want to do it.

In the independent, empowered female frame of mind, the episode detoured to discuss the idea of moving beyond traditional families with The Office star Mindy Kaling. The American actress and comedienne always wanted to get married, but never found the right guy as she became busy focusing on holding down a job and expanding her budding media career. With a touch of sadness, Kaling questions “why not me like, why am I not the person that got married?” Wanting to have kids and also not wanting to settle down with just any guy, Kaling decided to start a family – on her own terms.

Kaling’s honest frustration with the difficulties of finding the “right guy” while still yearning for a family and successful professional life shines light on a very palpable constraint many women face in their 20s and 30s. The looming pressure of figuring it all out: having a family and career life all sorted out and settled, strictly overseen by the frightening, voracious ticking of their biological clock.

The pressure young ladies feel nowadays should stimulate real concern and should be addressed by contemporary culture. What or who is to blame? A short analysis could point to the widely accepted Western life biorhythm, the idea of rigidly following the timeline of school, job, home, work, marriage and then children. Perhaps this economy first, capitalistic-oriented cultural outlook is untenable and we should be investing in economic or social benefits that help youngsters start a family, thus alleviating financial burdens. For inspiration, we can look at Hungary’s socio-economic policies, which have received acclaim from authentic conservatives the world over. Or maybe we are to blame the nature of relationships themselves, which have become dumbed down and superficialized, as Kaling herself points out, “I’d be in relationships because I wanted someone to go to the ArcLight with on a Saturday night so I didn’t have to go see a movie by myself if I’m really being honest.”

Although these topics were tackled with a blatantly feminsit undertone, they nonetheless need to be discussed in truth and honesty. Whatever you think of Meghan Markle, Archetypes should be applauded for providing a platform for women to relate to one another, share anecdotes and dig a bit deeper into the curiosities of the feminine mystique—with a sizable caveat that further post-episode conservative commentary would be required.