In the last two federal Conservative leadership races, the eventual winner scored victory only after a critical mass of socially conservative party members who backed pro-life leadership candidates with their first and second preferential votes, backed another candidate that some significant portion of rank-and-file pro-life Conservatives found more palatable than the alternatives. In 2017, Andrew Scheer eked past Maxime Bernier on the 13th and final ballot but only because he closed the gap once Campaign Life Coalition-endorsed contenders Pierre Lemieux and Brad Trost dropped off the ballot and a large portion of their voters indicated Scheer was their down-ballot choice. Likewise, in 2020, Erin O’Toole beat Peter MacKay because a significant portion of pro-life Conservative members who voted for CLC-enorsed candidates Derek Sloan and Leslyn Lewis, also put O’Toole on their ballot to prevent MacKay — who said that social conservatism was the “stinking albatross” around the neck of the Conservative Party — from becoming leader.

That may have happened again if Pierre Poilievre had not won 68.2 per cent of the points (allocated by the percentage of votes won in each individual riding) to score a decisive first-round victory. Poilievre signed up more members in this contest than voted in previous Conservative leadership races, raised more money than his rivals combined, and cruised to an easy victory, garnering nearly 71 per cent of the votes cast, a majority of votes and points in every province, and winning 330 of 338 ridings.

The media focused on the race between the populist firebrand and seven-term MP Poilievre and Red Tory Jean Charest, a former Liberal Quebec premier and federal Progressive Conservative leader. Charest won a mere 11.6 per cent of the vote, but his strength in Quebec and several large urban centres translated into 16.1 per cent of the point total. He won six ridings in Quebec and one each in downtown Toronto and Ottawa.

On social issues, there was little to distinguish the two, with both vowing to maintain the abortion status quo, and despite the media’s efforts to paint Poilievre as some sort of extremist generally, on the issue of abortion the frontrunner vowed that a Poilievre government would not legislate on abortion.

Joining Poilievre and Charest in their insistence to not touch abortion-on-demand, were second-term MP Scott Aitchison and a former Ontario MPP, Roman Baber, who won just one per cent and five per cent of the points respectively. 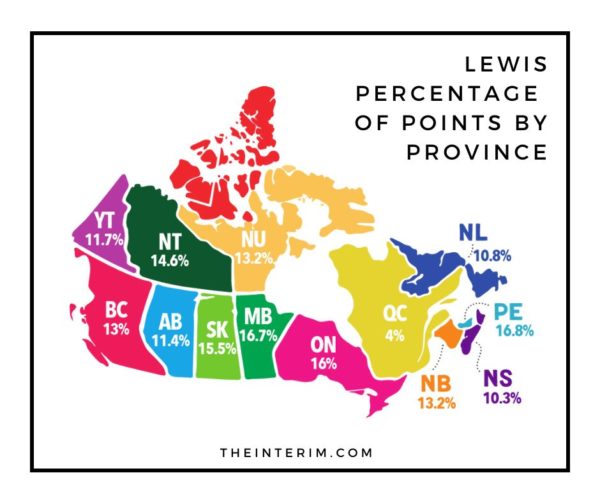 Leslyn Lewis, who actually had the most votes on the second ballot of the 2020 leadership contest but still finished third (35 per cent of the votes but just 30 per cent of the points), ran again and was the only candidate qualified for the ballot that earned Campaign Life Coalition’s green light as a supportable candidate; three others were either disqualified by the Leadership Election Organizing Committee or failed to qualify by meeting the fundraising or signature requirements. Lewis ran on a pro-life and pro-family platform that included ending taxpayer funding of foreign abortions, support for pregnancy care centres, and vowing to end Trudeau’s discriminatory policies against pro-life organizations. She also promised to extend the federal child benefit to preborn children, give parents who do not use institutionalized daycare the equivalent money directly to families, recognize parents are first educators, and promote adoption.

Some pundits, such as The Writ’s Eric Grenier, said that the poor showing of Charest and Lewis indicated that both Red Tories and social conservatives were becoming less important in the Conservative Party.

In 2020, Lewis had about 20 per cent of the points on the first ballot and 30 per cent on the second ballot. Ostensibly, finishing with about ten per cent looks like a poorer showing, but the fact is she had more votes on the first ballot in 2022 (46,374) than she had on the first ballot in 2020 (43,017). The difference between the two campaigns was that Poilievre signed up 311,958 new members — nearly twice as many people as had voted in the previous leadership contest. The social conservative vote held and it demonstrates that it is still an important part of the Conservative coalition. Lewis was simply swamped by the Poilievre juggernaut.

The strength of unabashedly pro-life candidates is always under-estimated in Conservative leadership races. In 2017, pollsters that actually included Brad Trost in their polling typically found him at one or two per cent, but he had 8.35 per cent of the points in the first round of voting. In the 13 polls during this leadership campaign taken of Conservative “supporters” — that is Canadians likely to vote Conservative as opposed to the actual membership — Lewis averaged 5.9 per cent while Charest averaged nearly three times as much at 16.4 per cent. Acknowledging that there is a difference between supporters and members, and conceding the limitations and problems with polling, the pundit class utterly failed to recognize the strength of Lewis, who practically tied Charest with 11.1 per cent of ballots cast compared to 11.6 per cent. The raw vote totals again demonstrate the relative size of the ignored social conservative candidate and the media-darling Red Tory, as Lewis won 46,374 votes compared to Charest’s 48,651, a difference of about 2300 votes. Furthermore, Lewis finished second in total votes and points in all four western provinces and the territories of Yukon and NWT. Lewis finished second in a total of 134 ridings and finished ahead of Charest in a total of 151 (libertarian-leaning Roman Baber finished ahead of both of them in 17 ridings).

Far from being disappointed, Campaign Life Coalition said it was encouraged by the strong support Lewis received. CLC national president Jeff Gunnarson said in a press release the “results prove yet again that socially conservative candidates such as Lewis, who fearlessly champion pro-life and pro-family values, continue to draw strong support from grassroots conservatives.” Gunnarson said that the Lewis campaign made a difference: “By running a principled and unapologetically pro-life campaign, Lewis has moved the yardstick by leaps and bounds for what it means to be a pro-life politician here in Canada.” He added that there is a lesson for pro-life candidates running for political office: “She made a clear pro-life vision for Canada where every single person, including those existing in their mothers’ wombs, are treated with true dignity and respect,” and she was rewarded with the votes of nearly 45,000 Canadian Conservatives.

While CLC could not support Poilievre and many supporters heeded its advice to only vote for the pro-life candidate, some pro-life Conservatives supporters ranked Poilievre first on their ballot because they admired his fighting persona and thought he could beat the Trudeau Liberals. Poilievre, who had a solid pro-life and pro-family voting record prior to flirting with a leadership run in 2019, has indicated support for the abortion status quo and the LGBQT agenda in recent years, but he still talked about the concerns of many broadly socially conservative voters when he attacked the government’s handling of the pandemic and the influence of the World Economic Forum. Gunnarson called upon Poilievre to fulfil his campaign promises made repeatedly made to social conservative party members throughout the leadership race, during which his campaign wrote in emails to those who asked about his pro-life and pro-family views: “Poilievre, although he continues to support abortion, promised free votes for MPs on matters of conscience, to promote the choice of adoption, and to defend pro-life crisis pregnancy centres from Liberal attacks.”

Gunnarson told The Interim that after this fall’s municipal and school board elections in several provinces, CLC’s focus will turn to candidate selection and the policy convention scheduled for 2023, as well as several issues in the next session Parliament such as the euthanasia review and the government’s plans to strip pro-life organizations of their charitable tax status. Gunnarson said he hopes to see Poilievre’s pugnacious opposition to the Trudeau government on display for these social issues that have galvanized tens of thousands of pro-life and pro-family Conservatives.