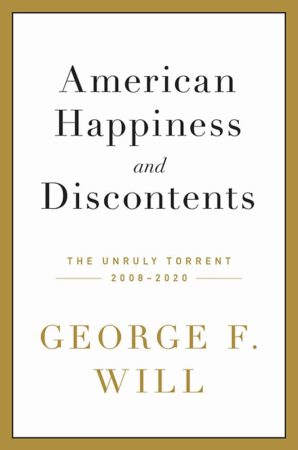 More than any person I do not know, the columnist George F. Will influenced me: he shaped my conservatism and sparked my interest in a career in writing. I look forward to each of his twice weekly columns but even more so his occasional collections of them. His latest, American Happiness and Discontents did not disappoint.

This collection covers a wide range of issues, with regular returns to history, the judiciary and cultural matters. A former professor, Will employs history to show us whence today’s controversies arose. He returns to books because they “remain the primary transmitters of ideas” and ultimately it is ideas that shape the world in which we live.

Will has moved from being a Hamiltonian conservative to a Madisonian one, or in British terms, from Burke to Smith. Will no longer decries judicial activism, noting that “judicial engagement” is necessary to protect constitutional rights from encroachments by the majority. Liberty is more important than democracy, after all, even if one understands democracy properly: “government by persuasion rather than majority bully or executive or judicial policy fiats.” There are more than 20 columns examining court rulings and their impacts.

Of particular interest to Interim readers will be the seven columns on abortion and euthanasia. Unfortunately, Will is skeptically supportive of euthanasia (“a right to die can become a felt obligation”), but on abortion he is a relentless critic of its advocates. He points out that “viability” is a terrible criterion for protecting preborn children because infants are not “viable” without the help of adults. Will mocks the trimester approach to regulating abortion wondering what jurisprudence would look like if mothers were pregnant for a prime number of months. He notes that the case against abortion is based on “elementary biological fact, not an abstruse theological deduction.” Will condemns the lack of media coverage for the Kermit Gosnell trial and lack of government oversight of his Philadelphia abortion mill. Will has several columns on the brutal eugenic war against preborn children with Down syndrome, culminating on a touching reflection on his own 40-year-old son, Jon.

There are relatively few columns on the presidents and current legislation – the author toils in the fields of the consequential rather than ephemeral. As this collection proves (yet again), Will’s writing rises above journalism and is worth reading — and re-reading.