The Rights of Women: Reclaiming a Lost Vision
by Erika Bachiochi 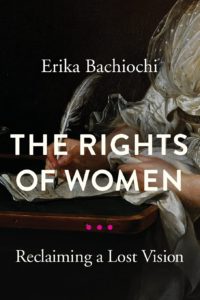 Well into the twentieth century, the “founding mothers” of women’s rights were pro-marriage, pro-motherhood, and pro-life. The modern feminist movement, conversely, not only no longer subscribes to these views, but actively works against them pro forma. What happened? In The Rights of Women, Erika Bachiochi assesses the incremental workings of our democracy. The mechanism of such a shift is a pile of papers: a court case, some legislation, an economic boom – and ultimately a willful blindness in the face of legal precedent.

Among other relevant considerations, Wollstonecraft believed the pursuit of virtue to be the primary work of man and woman. She saw the greatest opportunity for self-mastery in familial responsibilities, and emphasized that the raising and education of children was the foremost path to a just society.

This truly egalitarian concept – the right to pursue virtue – was adopted by proto-feminists in early American life, despite the inequalities that we look down upon today. Women had no property rights, could not vote, and for the most part did not work outside the home. However, we read as early as Democracy in America (1835) that Alexis de Tocqueville believed them to be the cornerstone of the nation. Here it is worth quoting Bachiochi at length: “(Tocqueville) worried over 700 pages that individualism and materialism would threaten to undermine freedom in the new democracy, if not checked by the communitarian tendencies promoted by family and religion. As the foremost shaper of mores, Tocqueville thought, women were uniquely capable of correcting these baser impulses of democracy, especially in the growing commercial republic… These women maintained networks of kinship, solidarity, and reciprocity in and through their productive family homes, thereby creating what historian Allan Carlson has aptly called ‘islands of antimodernity in the industrial sea.’ …Women’s lack of political and legal equality in the young nation was of no matter to Tocqueville: in his view, Americans had raised women ‘morally and intellectually’ to the level of men.”

Although any woman might take affront upon hearing that it “was of no matter to Tocqueville” that women lacked political and legal equality — an insufficiency which was the rightful genesis of the women’s movement — his prescient assessment resonates throughout the remainder of Bachiochi’s work. Like Wollstonecraft, he envisioned the person raised to a higher standard of virtue in order to transcend the witless itch of material satisfaction.

Bachiochi outlines the ensuing women’s movement with artful scrutiny. Each example she chooses reminds us that activism of any kind has never been homogeneous: some women fought for protective legislation that reflected their duties as caregivers, and some fought to be treated as absolutely equal to men, allowing more freedom of contact. As the latter gained more legislative and ideological support, society formed a cumulative judgment upon motherhood and child-rearing as less consequential than market work. It is fascinating to read about, especially since support for abortion could not have gained traction among feminists had not the libertarian dream already substantially devalued the centrality of the family.

The interpretations of freedom and equality that Bachiochi shows us to have assimilated hold up a human abstraction, free to feed the insatiable maw of commerce. This has served the woman employee very well, perhaps, but only insofar as she has the right to work like a man, and certainly not insofar as she is a mother, or poor, or single (or all three). The workplace is happy, because abortion (we are assured) has rectified sexual asymmetry. Equality, as far as the market is concerned, knows neither male nor female but only consumers and taxpayers.

Nevertheless, continuity with early feminism has not been abandoned. Throughout, Bachiochi gives us a window into voices on either side of the divide, most notably Justice Ruth Bader Ginsburg and scholar Mary Ann Glendon. Even in Ginsburg’s case, widely known for her abortion advocacy, we see her uphold traditional family values in her own life, and she had an undeniable track record of fighting for women’s rights where we practically needed them, such as maternity leave. The corpus of Glendon’s work, a legal scholar of high repute, reminds us that the autonomous individual is often a legal fiction, and that liberty is better understood in the context of familial and community support. Many readers will identify with original feminist principles, but would be wary of calling ourselves feminists. This is in part because there is something fundamental missing from the discussion on women’s rights, that is, motherhood as a good. As the 19th century child rights activist Florence Kelley said, “the care and nurture of children is… a vital concern of the nation.”

Bachiochi offers us a cohesive historical lens through which to adopt Wollstonecraft’s program of virtue today, even as we already see it bearing fruit in households that we admire. “Without that intentional human development properly prioritized in the life of the home,” Bachiochi asserts, “persons (and markets) [will] do little good outside of it.”

Emma Castellino, a regular reviewer for The Interim, lives in Hamilton with her husband and daughter.