Edmund Burke the statesman is best known for something he likely never said: “The only thing necessary for evil to triumph is for good men to do nothing.” There is no record of the Dublin-born statesman saying it, but it sounds like something he might have uttered. Indeed, a preoccupation of Burke, often regarded as the philosophical founder of modern conservatism, is the right moral ordering of society. 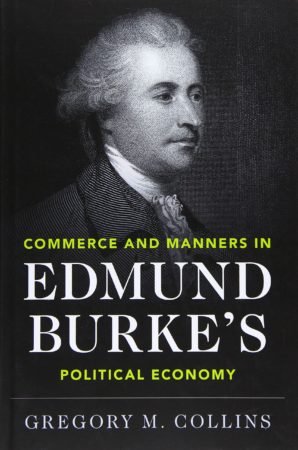 Gregory Collins, a lecturer in the Program on Ethics, Politics, and Economics at Yale, is probably most important living authority on Burke outside of England today and in his new book Commerce and Manners in Edmund Burke’s Political Economy, he provides a thorough account of Burke’s thought on the issues with which the one-term MP but long-time civil servant grappled with from the Irish question to the British East India Company, from the American colonies to the terror of the French Revolution (the last of which he saw much clearer than any of his contemporaries).

Collins notes that Burke always stressed manners and morals as a precondition for a healthy society. To that end, Burke thought legislators had a responsibility to protect family and marriage, private property, religious institutions, and historical customs and traditions. Burke understood that statecraft is soulcraft.

Contra the Scottish philosophers David Hume and Adam Smith who “adopted the Enlightenment perspective of political economy that attributed the growth of civil society to the advent of market liberty,” Burke saw that commercial society was made possible and sustained by good manners and morals. The free market, he understood, required a high degree of trust and other manners. Collins writes, “The steady hands of chivalry and the nobility and religion spawned the preconditions of economic vitality. Ancient virtue furnished the civil environment necessary for the commercial virtue to blossom.” (That said, Adam Smith, too, appreciated the necessity of virtue to ensure the smooth operation of commercial life.)

Libertarians who worship at the altar of free markets need to spend less time with Ludwig von Mises and Frederic Bastiat (two thoughtful critics of statism) and more time with Burke. A strong and free economy requires strong families, vibrant local communities, and robust religious life that help deliver stable institutions such as governments and courts that protect private property and uphold contracts.