The scientific odyssey of motherhood

The scientific odyssey of motherhood 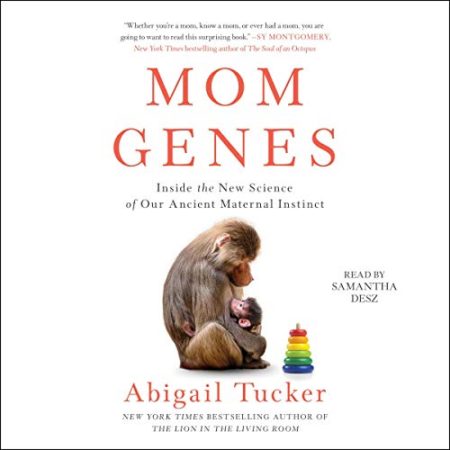 When the book Mom Genes Inside the New Science of Our Ancient Maternal Instinct by Abigail Tucker, was given to me my first response was there is no way I am up for or want to read book that is science-heavy right now.  Between having “pandemic brain” and trying to bring something new to the monotony of lockdown for our family, in no way was I up for a heavy read. But the subject manner was one that interested me so I thought I would at least crack the spine and give it a try. And, I am so thankful that I did.

According to the inside flap cover Mom Genes examines how “scientists are only just beginning to understand the making of a mother.” It is, throughout, an informative, engaging, interesting, and readable explanation of the ways the human body changes (both good and bad) due to motherhood. Within the first few pages Tucker had the ability to not only grab my attention but to present me with information that made me want more. To relate but one example: an (aborted) “son’s lingering cells had rebuilt an entire lobe of one woman’s ruined liver.” In example after example, Tucker shows that the “Fetus is designed to protect the mother, the organism most essential to its future survival.”

We know what happens to our bodies physically during pregnancy and childbirth.  As mothers we understand these changes — sometimes celebrating them, at times lamenting it, and often talking about it with family, friends, even complete strangers. What Tucker does is delve deeply into the genetic, chemical, and other physiological changes underlying the vague idea of what we know is happening.  Mom Genes also delves into changes that many of us may not even been aware of: changes that can begin at the moment of conception and stay with us our until natural death; changes that can not only alter the way our brains work but its physiology; changes that can occur when our preborn children’s cells “colonize our lungs, spleens, kidneys, thyroids and skin.” As Tucker writes, “Their cells embed in our bone marrow and breasts. Often they stay forever.” The sum of these changes impact our lives far more than any outward physical change during the nine months of pregnancy ever will, yet these are changes that until we read Mom genes, most of us know little to nothing about.

Tucker is acutely aware that mothers are not the only ones involved in and impacted by these changes.  She examines the role of support systems and spends an entire chapter exploring dad genes and their roles in their children’s lives and development from the moment of conception. And while some traits of children are split 50-50 between parents (for example, earlobes), there is also a large-scale genetic war going on throughout pregnancy. “Biologists see genomic imprinting in the placenta as shoving match between mother and father.” Tucker explains “scientists suspect that the imprinted dad genes are driven to maximize maternal care.”

There is not much politics or public policy in Mom Genes until the final chapter when Tucker compares the support systems in the United States with other countries. Though Canada does fair better than the U.S., we have only begun to scratch the surface. We are no where near the Netherlands where they offer a personal Kraamverzorgster (a caretaker that visits daily for several hours) or Australia which supports mothers, children and families with solid, tangible and effective support and care for up to three years.

As a writer Tucker is very relatable. She is the mother of four, pregnant with her fourth during the writing of Mom Genes. She takes us through the births of her children and her growth as a mother. She is forthcoming about some of the highs and lows her family has gone through and the impact that has had on her as a mother. But her honesty and readability doesn’t diminish any of the numerous scientific studies she quotes, the lab tours she walks us through, or the numerous scientific connections between humans and other mammals she makes. Regardless of how overloaded your brain is at the moment this book will hook you in and make you take pause for all going on in and to mothers.

Curl up on the couch with a copy of Mom Genes and discover what “extreme makeover brain edition” really means and let Tucker explain to you how and why scientists are now just beginning to understand the making of a mother.

Christina Tuns is a mother of six who lives in Toronto.